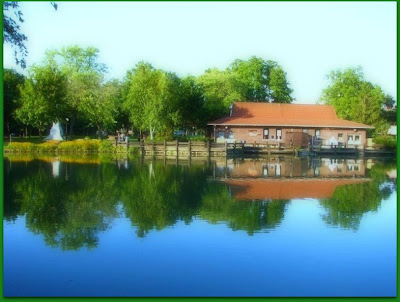 Here is the boat house at the Victoria Park lake. At one time you could rent a canoe or paddle boat by the hour at the dock. Over the past three quarters of a century or more the park has attracted large numbers of people on weekends and evenings. In the winter there used to be skating and the boat house was used for warming up cold fingers and toes or to sit and drink a cup of hot cocoa. But the boats are gone and most recent winters have been too mild for skating. 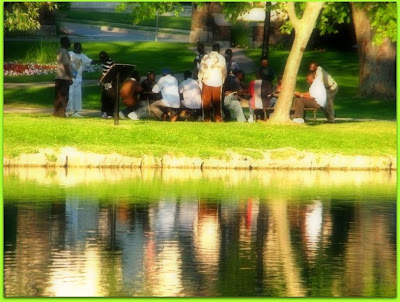 Groups of people still meet here, many of them recent immigrants to Canada. These men of African origin gather in the evening to play a game on the picnic tables. Near the boat house Mallard ducks approach people on the bank and look for free food scraps. There are signs asking visitors not to feed the birds, but there are always a few who do so regardless. 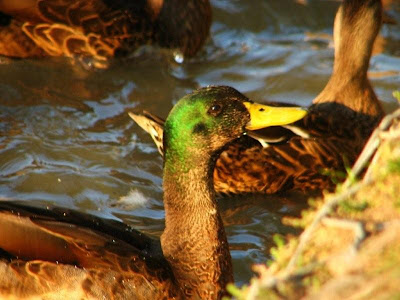 This is the first male Mallard I have noticed this season with new green head feathers. I used to wonder where all the male ducks went in the summer time until I learned that they lose their bright colours after breeding and do not gain them again until September. I was watching the Mallards as a small boy threw cracker pieces into the water when a smaller duck with an unusual swimming stroke approached. 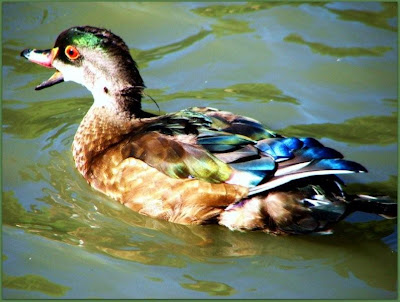 A male Wood Duck, also coming into his breeding plumage, started scrapping with the Mallards for his share of the food. I have never been close to a Wood Duck and have found them to be very skittish at the swamp. I saw the Wood Duck around the boat house three days in a row on the weekend and it looks as if he has made his home here for now with a group of Mallards. 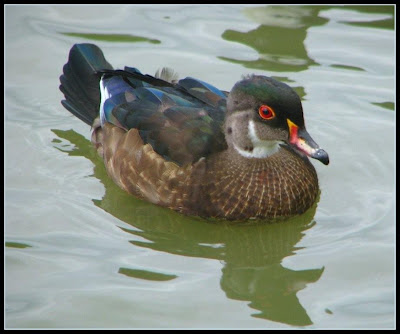 I hope he stays around until his plumage is fully eclipsed. Right now he hardly stands out in the crowd from a distance. You can bet I will be hanging around the boat house more often in the next few weeks.
Posted by Ruth at 4:16 pm

Email ThisBlogThis!Share to TwitterShare to FacebookShare to Pinterest
Labels: birds, people and places