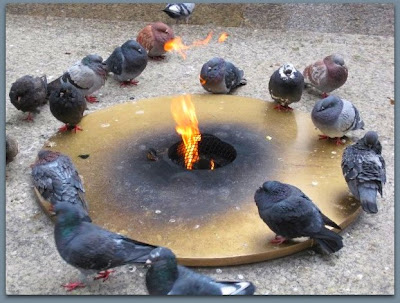 Pigeons roasting by an open fire...

One of our daughters took a spur of the moment road trip to Chicago this past weekend with a friend. Chicago is a good seven to eight hour drive west of here on good roads if the weather is fine. We had an exceptionally warm November and until yesterday had no measurable snowfall in our area. But when we hear of storms and cold weather west of us, we know our turn is coming soon. One of our most frequent winter storms is called an Alberta clipper, or Canadian clipper south of the border. These fast moving low pressure systems move from the west between December and February and often pick up moisture as they pass over the Great Lakes. I don't know if the storm this week was a clipper, but we received a nasty mixture of snow, freezing rain and rain and now the temperatures are dropping as winds bring heavy snow flurries off Lake Huron.

These pigeons were huddled around a flame in downtown Chicago a couple of days ago. Eldest daughter called them "pigeons roasting by an open fire, (Jack Frost nipping at your nose)..." I don't know of any similar warming fires in our city and the birds will be roosting in protected areas tonight. 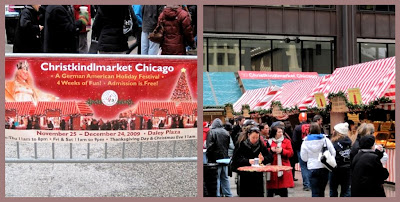 I have never been to Chicago and thought it was just another big industrialized city without a lot of tourist appeal. But it looks like an interesting place to visit, especially in December. Their Christkindl Market runs through the month and looks very similar but larger than our local four day Christmas market.