Blogging is so last year! 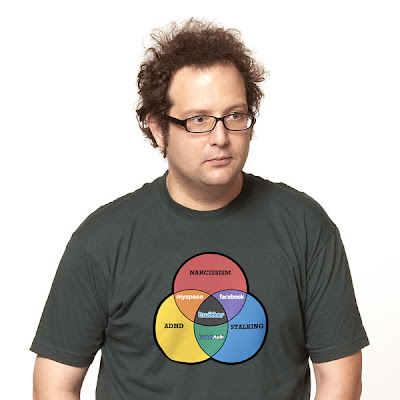 Thanks to Jayne for directing me to Despair.com

I offered to drive her to the bus terminal on my way home and she accepted the offer gratefully. Young and pretty, she held her PDA in one hand, plugged the end of an earphone in the unit and the other in her ear. I watched out of the corner of my eye as she moved her thumbs with amazing speed and sent text messages to an invisible recipient while listening to her music. A few seconds later the PDA vibrated, a response was acknowledged, and her thumbs went into action again. Five minutes of silence passed and more as we waited at a red light near her destination. I am comfortable with companionable silence and did not interrupt her social networking agenda. I am older than her mother, but right now am also a person who can pass or fail her on the final placement of her course. She is fashionable and bright but interacting with real people in new situations makes her visibly nervous and anxious. She has difficulty engaging in small talk.

I watch teenagers in church as they text their friends during the sermon. Others text while driving, putting their lives and the lives of others at risk.

I dropped her off and she thanked me politely for the ride. The news came on the car radio and the announcer said,

"Blogging is so last year... A study has found that young people are losing interest in long-form blogging, as their communication habits have become increasingly brief and mobile." (source)

Writing and commenting on blogs is taking a back seat to other forms of social networking with people under 30 years old. I have a Facebook account and interact with family and friends daily on this platform. But I have avoided Twitter and texting, accessing the internet from my computer only. I still read real books but all types of print media are struggling to make a profit these days. I doubt this young student opens a book outside of school. Another news report this week said,

"Little or no grammar teaching, cellphone texting, social networking sites like Facebook and Twitter, all are being blamed for an increasingly unacceptable number of post-secondary students who can't write properly. (source)

I got a "fashionable" Razr cell phone three years ago which is now a relic in the fast changing world of electronic devices. (It is a really lousy phone too!) My cellular provider has sent me letters advising of the opportunity for a "free" iPhone or Blackberry with my next contract. Do I want to enter this portable internet world, a world requiring good eyesight, fast thumbs and multi-tasking prowess? Will I have to own one eventually? Technology prophets predict that PDAs will be used instead of credit cards before long.

For the time being I will continue to read books, write blog posts, use Facebook moderately, and buy a basic cell phone. I will be sure to engage in face to face conversations with people each and every day, but the world is not following my example.
Posted by Ruth at 12:21 am