Death and Life in the Park 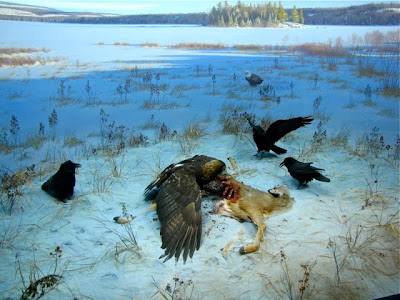 The first bird we saw as we drove through Algonquin Park was a Golden Eagle which flew from a tree top in front of our vehicle. It was the first time I had seen this large bird which winters in this region. Near the east entrance to the park, the visitor centre had several displays featuring taxidermic animals and birds. One showed a Golden Eagle feeding from a deer carcass while Ravens and a Bald Eagle waited their turn. 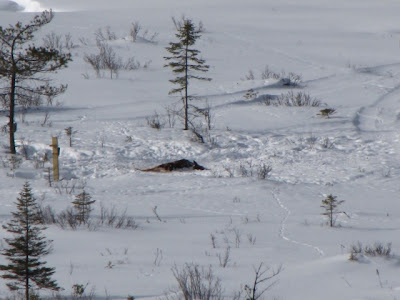 Park rangers placed a road-killed deer far out in a bog below the visitor centre and had a telescope focused on the animal. Wolves had been spotted earlier near it but there were none around when I took this picture. Three days later, wolves removed the carcass and the pack is shown on this YouTube clip. 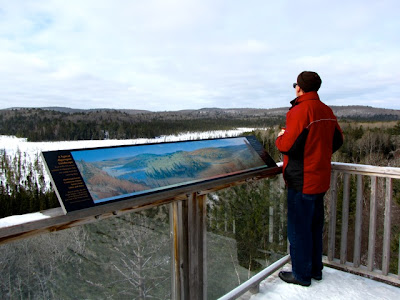 My husband is standing on the balcony of the visitor centre looking for action around the dead deer. Winter is difficult for wild creatures and many do not survive the harsh conditions. There are few seeds and berries for the birds this year and feeders here have supported Goldfinches, Gray Jays, Pine Grosbeaks, Chickadees, various woodpeckers and a few Pine Martens. Pine Martens are particularly fond of eating Red Squirrels and there were plenty of squirrels around the feeders. 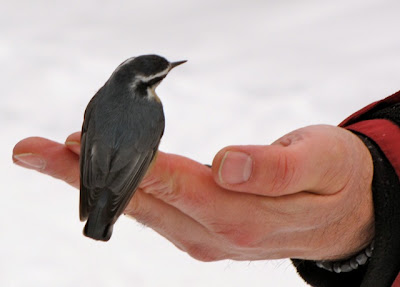 We are very used to Chickadees feeding from our hands but Red-breasted Nuthatches seldom are this tame. The birds were accustomed to humans and flew toward us before we had seeds ready for them. While we saw very few animals in the days we were there, fresh tracks criss-crossed the snow and provided evidence of life in the bogs and forests. Most of the action was taking place during the night and pre-dawn hours of the day. We stayed in a nice motel in town, but I would consider staying in one of the yurts (with electricity and floors) which are available for winter camping in the park. Perhaps I would see the animals who leave the tracks as they work to survive in the wild. 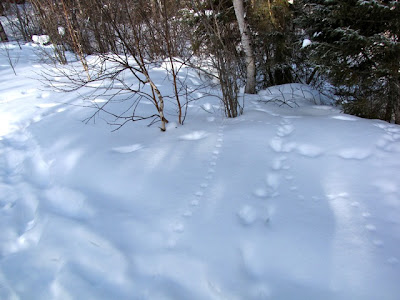