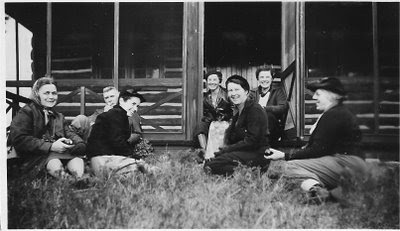 When this blog was very, very new, I wrote about Grandma's birding club which had its inaugural outing on May 3, 1937. In the first picture, Grandma and her friends are sitting on the ground outside the cabin at the farm which is 5 miles outside of Aurora, Ontario. In another post I wrote about a birding birthday party held on the property in 1944.

In early 1942, a Gray Jay, also known as a Canada Jay or Whiskey Jack was seen at the farm. 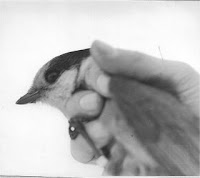 The Gray Jay is a bird of boreal and sub-alpine forests and is rarely seen as far south as Aurora. On January 11, 1942 the bird was banded by the Toronto Field Naturalists and the event was written up in the newspaper along with this picture of the bird.

I have never seen a Gray Jay and this past long weekend, my husband and I drove three hours north of Toronto to Algonquin Park for some winter trail walking and nature exploration. Birding has been very slow at the park this winter as there are few pine cones or berries around. Last winter large numbers of winter finches and grosbeaks were found all over Ontario but only a handful of sightings have been reported this year. 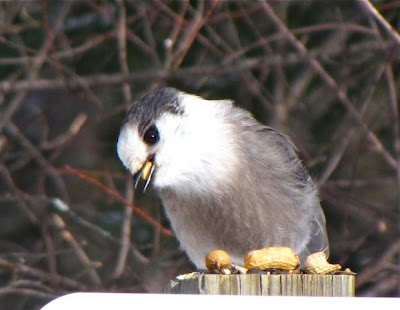 Highway 60 runs west to east for 56 kilometers through the southern portion of Algonquin Park. Most of the 7630 square kilometers of this huge provincial park are inaccessible by road. But there are many trails along the highway where people can walk, ski or snowshoe in the winter and animals like moose, deer and wolves are sighted daily. At kilometre 10, we had a magnificent view of a Golden Eagle flying up in front of the truck. This eagle is not very common our area. We found no Gray Jays the first day and were a little overwhelmed trying to decide where to look for them. A helpful employee at the visitors' centre told us of a few places to start our search and we came back early the next morning. 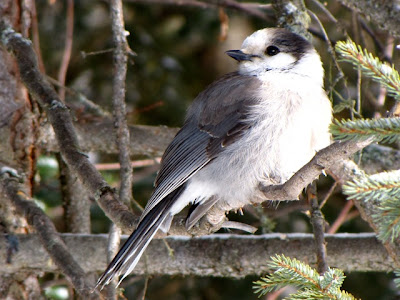 Gray Jay
February 15, 2010
We found two Gray Jays who stayed in very close range for over half an hour. They are beautiful birds and are much larger than I expected. In my next post I will share more pictures and information about this pair of birds.