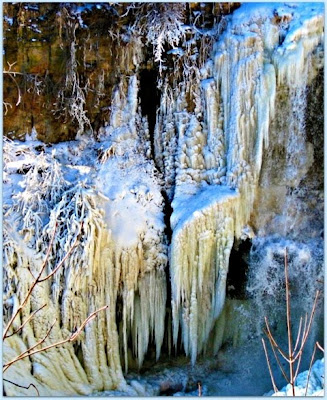 Ice buildup at Webster's Falls, Hamilton, Ontario
A strong high pressure Arctic air mass pushed down from the north this weekend protecting us from the bad snow storms south and east of the Great Lakes. Along with very cold temperatures, we enjoyed bright sunshine and clear skies. We have so little snow that winter boots are not necessary in the city but they are needed for warmth if you are outdoors for any length of time. I bundled up in several layers of clothes and actually went to a store to buy a warm winter hat this weekend. Hats are not my favourite accessory and I usually manage with just the hood of a jacket if the wind bothers my ears. But this cold demands some extra precaution. 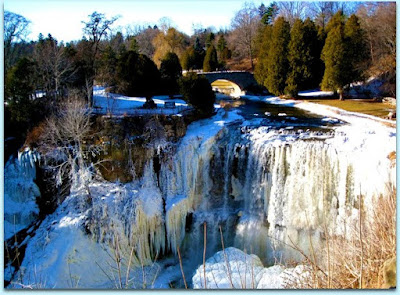 Webster's Falls
The Niagara Escarpment winds its way around the Niagara peninsula, through Hamilton and Milton and north through Orangeville up to Manitoulin Island in Lake Huron. We are in easy driving distance of many sections of the escarpment. Many creeks drop over the limestone cliffs creating picturesque waterfalls. Niagara Falls is the most famous escarpment cascade, but there are many others worth visiting. I heard about the ice formations at Tiffany Falls in Ancaster near Hamilton and set out to visit it on Saturday. It is the only area waterfall where ice climbing is permitted. The falls are about half a kilometer in from the road and I made it two thirds of the way before sheer thick ice on the trail slopes made me turn back. I watched three people in a row fall hard while trying to walk on the ice. I did see one climber on the ice as he made his way up the falls. 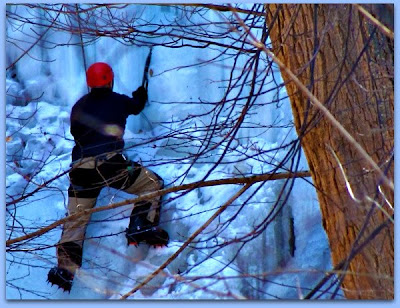 The Dundas Peaks have several spectacular waterfalls and the Bruce Trail allows safe viewing access. Webster Creek falls 30 metres over the escarpment and nearby Tews Falls drops 41 metres into the Spencer Gorge. The trails were easy to walk because of the lack of snow yet the cold air turned the spray from the falls into interesting ice shapes. 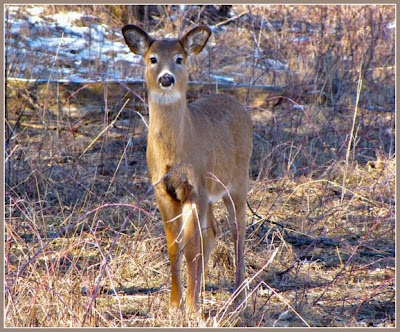 Deer along the Bruce Trail

The Escarpment is home to many wild animals yet the urban sprawl of Southern Ontario is encroaching on it in many places. Iroquioa Heights Conservation Area is bordered by new housing developments, an expressway and big box stores. The deer population has grown and the animals have no place to go outside the park. They have become used to human contact and look for handouts of food from people who use the trails. I came across three deer and expected them to run as I approached. Instead, they came toward me expectantly but I had nothing to offer them except sunflower seeds. While this was a interesting experience for me, it is not a good situation for the deer. 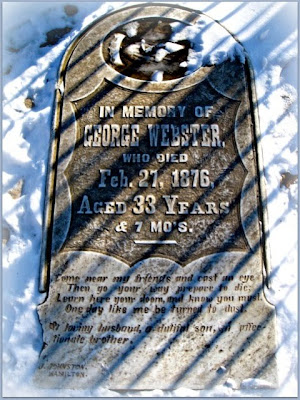 I like old cemeteries and the plot of the Webster family is near the falls of the same name. Old epitaphs were often written as moral lessons and warnings to the living and George's tombstone is a good example. He was a young man when he died but he is not forgotten as his grave is viewed by all who walk this section of the Bruce Trail.

Come near my friends and cast an eye
Then go your way prepare to die;
Learn here your doom and know you must
One day like me be turned to dust... 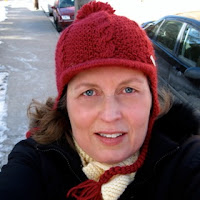 Email ThisBlogThis!Share to TwitterShare to FacebookShare to Pinterest
Labels: history, my world, trails