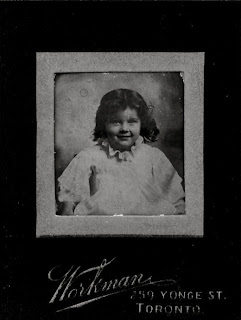 Today is the 20th anniversary of Grandma Devins' death. I think of her every day and realize that she really does live on in me. She taught me many things and the decisions I make, the things I say, the hobbies I enjoy are greatly influenced by her example.

Years ago my aunt dropped by to see Grandma and I said to her, "Do you ever look tired!" Grandma gently scolded me later and told me that my comment made my aunt visibly sag and even look more fatigued. I never forgot that and usually try to say things which are positive and uplifting.

Today is rainy and cold so I cleaned out a drawer. Grandma always said she was never bored and if there was nothing else to do, there was always a drawer to tidy. I found this picture of her taken in June 1899 when she was three years old.

Families are so important yet their influence is declining in Western nations. Birth rates have dropped precipitously since I was born, marriage is delayed and relationships are often casual and transitory. Children may have many blendings of siblings, grandparent figures and extended family as their parents move from relationship to relationship. I see elderly people at work who are lonely at the end of their lives as their families are separated by distance or are too busy to visit and assist with their care. Families are multi-generational units which work best when they are together.

Other cultures have maintained much stronger family ties (for now). I rarely see elderly parents of immigrant families waiting for nursing homes as their cultural norm is to care for their parents. I receive forwarded emails warning that Europe will be overtaken by Muslims in the next couple of decades. The truth is, European birthrates are low, Muslims have strong families and higher birthrates so their population will increase. The same is true in Canada where immigration is necessary to maintain our population. 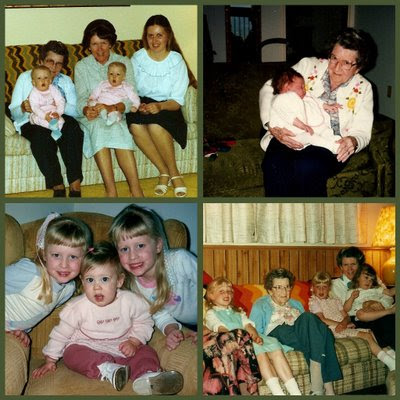 Various pictures of four generations of my family including Grandma

I am not being critical of people placing parents in nursing homes, nor of increased immigration and a multi-cultural society. Our own family is not increasing exponentially, in fact its members are decreasing in number with each generation. One of my friends told me she is worried about being alone in her old age. She is far from her birth family, has no children or extended family, and has had a succession of failed relationships. Right now a career is keeping her occupied but what will happen if she becomes ill?

Moral, cultural and spiritual absolutes are dissolving. Some would argue that this is a good thing, but in my opinion, the erosion of the family unit is damaging and costly to society. Generations to come will be affected by decisions we make now. I am thankful for those in past generations who invested in my life and influenced me to be who I am today. 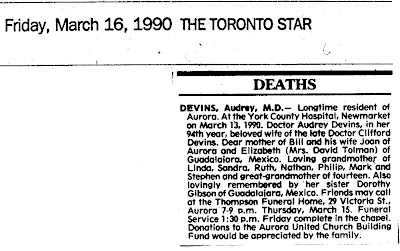