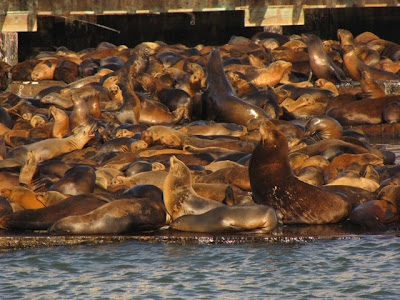 California is home to various seals and sea lions and we enjoyed viewing them when we visited last fall. There were many sea lions in San Francisco at Pier 39 but they suddenly left the area at the end of November for reasons unknown. Apparently a few are now returning. (source). They were smelly, noisy and amusing to watch and I am glad we got to see them. 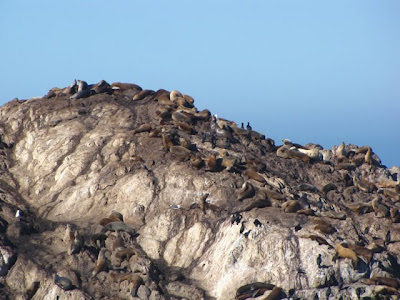 Harbour Seals near Pebble Beach, California
We saw many Harbour Seals on the 17-mile Drive at Pebble Beach near Monterey, California. They sunned themselves on rocks near the shore while balanced on ledges and steep slopes. Brown Pelicans and Cormorants were their close neighbours. 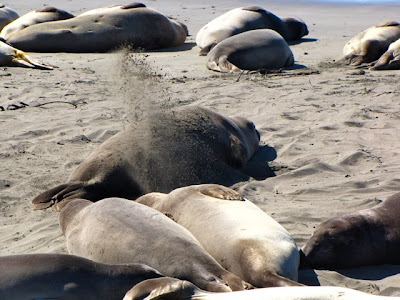 South of Big Sur along California Highway 1, we stopped at the beach near Point Piedras Blancas where many hundreds of Elephant Seals were lined up on the sand. They were mostly inert but every so often one would flick some sand on its back. In the picture above, a seal is sanding its back with a very subtle flick of its flipper. These seals are the largest pinnipeds and are much larger than Harbour Seals. Males can weigh up to two tons and reach a length of ten feet. 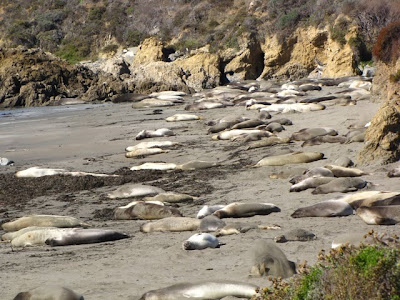 It was too cold in late October for the average person to sun themselves on the beach but humans can exhibit behaviour similar to these seals and sea lions. I was looking at pictures on the BBC website last week which showed 5000 naked humans supine on the steps of the Sydney Opera House in Australia. Artist Spencer Tunick has done similar photo shoots in other parts of the world. His work is not erotic in nature, but reminds me of pinnipeds on rocks and beaches. Some poses are reminiscent of pictures taken in Nazi concentration camps. It does not take much to erase human individuality and make a group of homo sapiens look just like another herd of mammals. 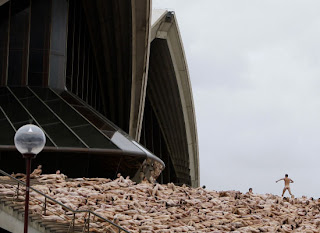 Photo from The Huffington Post
Posted by Ruth at 12:03 am

Email ThisBlogThis!Share to TwitterShare to FacebookShare to Pinterest
Labels: nature, people and places, this and that, vacations