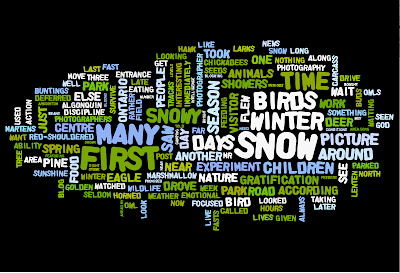 Whoever decided to make February a short month must have lived in the Northern Hemisphere in a place where it was endlessly white and grey and cold. The word cloud above was created on Wordle using February's blog posts. I won't point out the most frequently used words as they have had enough use this season. February had its highlights such as our weekend at Algonquin Park and the Vancouver 2010 Winter Olympics. 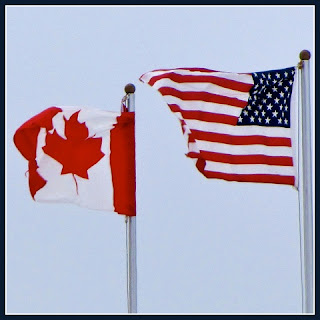 I am not a fan of professional sports but these games made me proud to be Canadian. American athletes excelled as well, but the gold medal hockey game was the final test of sibling rivalry between our country and our good neighbours to the south. Through the magic of Facebook, Yahoo messenger and telephone, we watched the game with my brother and nephew in the UAE, our daughter in Mexico and other family and friends in various cities in Ontario.

I put aside the lesson plan in Sunday School yesterday and allowed the children to cut out newspaper pictures of the Olympics. We talked about the verses in 1 Corinthians 9:24-27 which make a comparison between athletic training and our lives as Christians. Here is a paraphrase from The Message.

You've all been to the stadium and seen the athletes race.
Everyone runs; one wins. Run to win.
All good athletes train hard. They do it for a gold medal that tarnishes and fades. You're after one that's gold eternally. I don't know about you, but I'm running hard for the finish line. I'm giving it everything I've got. No sloppy living for me! I'm staying alert and in top condition. I'm not going to get caught napping, telling everyone else all about it and then missing out myself.
Welcome March! The weather might be sloppy it is time to live my life like an athlete, with discipline and a goal, but enjoying each day of the journey.
Posted by Ruth at 8:14 am