Saturday was a beautiful day, not typical of December 16th in . The temperature was 5C and all the snow we had last week had melted. The Becka and I took the dog to my favourite river trail near the hospital for a long walk, armed with 2 cameras and binoculars. 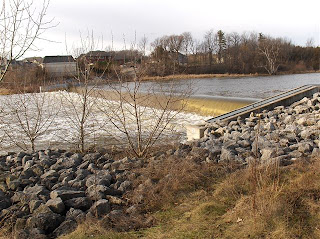 The river was higher than I have seen it all year from the snow melt in the watershed, and the current was very fast. I kept away from the banks as the dog loves to wade in the water, and it looked dangerous even for him. We saw ducks hurtling downstream looking as if they were on a wild ride at an amusement park. The sun was shining, there are no leaves on the trees, and no one else was on the trail.

Susan would have added 10 birds to her list and Laura would have found some unusual water bird or obscure sparrow. Bev would have had spectacular photos of National Geographic quality. I was determined to see some birds…. and I did. 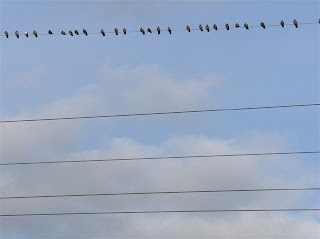 The first group was lined up on the high tension wires above the river, looking like they were at a baby shower. Every so often, they would fly in a circle, return and change seats. I had no idea what they were, but used the maximum zoom my camera had to take a close up of…pigeons. Well, they are kind of pretty. 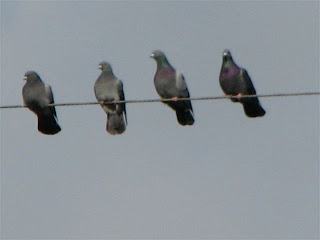 Further down the trail was a large gaggle of geese, at least 50 by my count. The dog started a chase, and they flew en masse into the river….Canada geese.

Both of these bird species have a bad reputation, mostly because they poop in the wrong places. Their numbers are prolific and they have become very urbanized. Our Canadian geese have forgotten that they are supposed to go to the States for the winter. They fly in “V” shapes around the city all winter with loud honks, and return to the same place they started. If young goslings are not shown how to go south, they will never do it themselves, and then they cannot teach their offspring anything but city cruises. 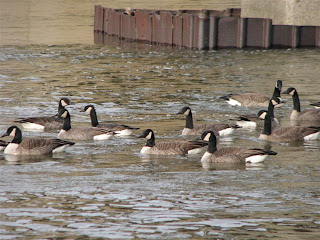 Geese love parks and golf courses and leave trails of slippery excrement in places where people may slip and break an ankle. But they are a protected species here and in many states, and cannot be shot or poisoned.

My daughter visited this year and while there were large crowds in the tourist areas, the pigeons far outnumbered the people. Pigeon excrement is corrosive to cement and metal, and therefore a concern in the preservation of ’s old buildings and statues. In one city in , tourists are encouraged to buy feed for the pigeons that is laced with contraceptive drugs. I like listening to the mourning doves around our house in the spring and summer, but as cousins to these pigeons, they are also very messy birds.

I guess if you are rare, beautiful, and neat in your habits, you are a good “birder’s bird”.

If I were a bird, I would likely be a common one, maybe even considered a pest by some. The media prefers to track the movements and habits of people like Oprah, George Clooney and other “interesting” celebrities. They must be the rare birds.

So I will enjoy the geese and pigeons as they are probably more my kind. 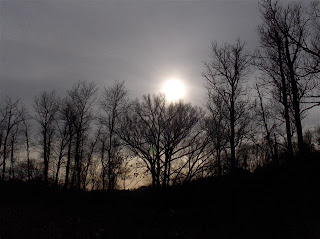