I have no small children to buy gifts for this year. In fact, I do not even know what toys are the most sought after this year. When our girls were little, there was a Cabbage Patch doll craze and a severe shortage was created due to high demand. They were sold at inflated prices and aggressive shoppers would line up in large numbers when they heard that a store had some stock. 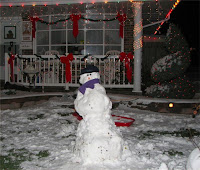 I have been a child, had children, and continue to love watching children at play. Grandma had a small wagon that contained a set of interlocking blocks. Whenever we went to her house, it was a treat to play with the blocks, building roads and bridges and houses in front of her fireplace. We also had American logs, tinkertoy, and lego sets which gave hours of creative pleasure.

Community Doctor of Borneo Breezes did a post a few weeks ago featuring photos of children at play in Africa. Their toys were created with materials on hand, but the joy in the children’s faces demonstrated that the monetary value of their playthings was not relational to the pleasure they brought.

This photo demonstrates the play value of a mud puddle. These little Mexican children have only one toy car, but the mud is available to all. My daughter, in the pink pants, rushed over to join these children playing with their ball in this poor village. She was happy to have playmates and even though she could not speak their language, ball playing was a universally game that allowed anyone to join in.

We had our first “packing” snowfall of the season today, and during our after dark walk saw that snow is another priceless play material. I watched one mother help her toddler put a carrot nose in their snowman and envied her position. I told her how lucky she was to be able to play outdoors and she agreed that it was a great way to unwind.

The best toys require imagination and interaction with other playmates. No matter how many expensive, high-tech toys are available to children, they will continue to find the most pleasure in sand, snow, mud, a piece of paper, a blanket fort, preferably shared with you.

These photos will enlarge if you click on them. I have had difficulty with this photo feature on recent posts, as well as general Blogger formating issues!
Posted by Ruth at 7:40 am