Rabbits in the Snow 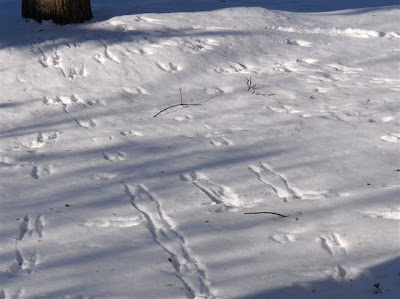 There are a large number of wild rabbits in our neighbourhood. I use the term “wild” loosely, as they are very bold and visible. When we walk the dog on his leash, they seem to be aware that he poses no real danger to them as they sit like statues on the lawn watching us go by. Invariably, the dog will sniff one out when he runs loose in the field, but they zig zag away and find a hiding spot before he really gets into the chase.

I was looking at rabbit tracks in the fresh snow this weekend and was reminded of some favourite childhood books by Thornton W. Burgess. 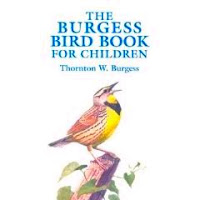 He was a prolific writer for children, and his main character, Peter Rabbit, was a student of nature. His teachers were Mother Nature, the Merry Little Breezes, the Laughing Brook and the other creatures in the Green Forest. We had old copies of The Burgess Flower Book for Children and The Burgess Bird Book for Children at home. I have Mom’s copy of the Burgess Flower Book which she received for her birthday in 1940, but do not know what happened to the other book. These hardcover volumes have lovely illustrations, some of them photographs which were exquisitely hand-coloured. They are wonderful read-aloud stories for children that entertain and teach as well.

When our girls were little, they loved the cartoon called The Green Forest which was featured on PBS every weekday morning. The characters from Thornton Burgess’ books came to life in the series, and we had to tape episodes that aired when we were out.

This little excerpt is from The Burgess Animal Book for Children. Peter is learning a lesson about his rabbit cousins….

Peter scratched one ear with a long hind foot and hesitated as if he didn't know just how to begin. Old Mother Nature waited patiently. Finally Peter began rather timidly. "Of course," said he, "the only way I know how I look is by the way the other members of my family look, for I've never seen myself. I suppose in a way I look like all the rest of the Rabbit family. I have long hind legs and short front ones. I suppose this is so I can make long jumps when I am in a hurry."
Old Mother Nature nodded, and Peter, taking courage, continued. "My hind legs are stout and strong, but my front ones are rather weak.I guess this is because I do not have a great deal of use for them, except for running. My coat is a sort of mixture of brown and gray, more brown in summer and more gray in winter. My ears are longer for my size than are those of most animals, but really not very long after all, not nearly as long for my size as my cousin Jumper's are for his size. My tail doesn't amount to much because it is so short that it is hardly worth calling a tail. It is so short I carry it straight up. It is white like a little bunch of cotton, and I suppose that that is why I am called a Cottontail Rabbit, though I have heard that some folks call me a Gray Rabbit and others a Bush Rabbit...

I need to borrow a little child to read to, but then again, the little child in me has found some good bedtime reading!

Laura, from Somewhere in NJ, wrote this post in March about her love of the Burgess Bird Book for Children. Take a look !
Posted by Ruth at 6:36 am