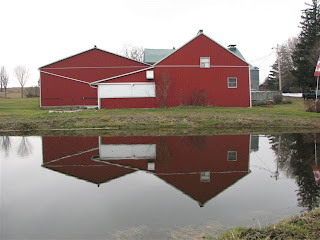 For a number of years, I worked full time in the community, travelling in a mainly rural area of the region. I was expected to do at least eight visits a day and would sometimes travel 125 km in the process. In good weather this was a pleasure, but when winter snow was whipped by the wind, it was downright hazardous on the country roads. Home care providers are paid per visit, and do not get reimbursed on snow days. My contract employer didn't make money if the weather was inclement, so there was always pressure to do visits in spite of poor driving conditions. This is one of the reasons I returned to working at the hospital, but I have maintained a small community caseload because I love doing home visits.
Today, I travelled to some small, outlying communities. It was hard to believe it was December 28th. 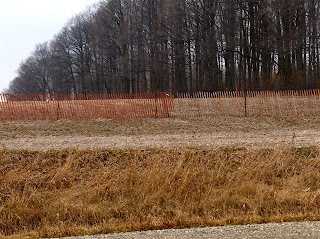 Snow fences have been erected in fields adjacent to roads and lanes to curb drifting snow. Orange roadside markers are in the ground to help the snow plows avoid the ditches.
But there is no snow.
I took these photos of some ponds I passed today on my travels. The largest pond is in the centre of a small village and it should be frozen over now, perfect for skating. There are signs posted warning skaters to stay off ice at all times. Even when the weather is cold enough, ice has been increasingly unsafe in recent years due to rising salination of streams and ponds from the heavy use of road salt. For many decades, there has been outdoor skating at a small downtown lake in our city. A couple of years ago, skating was permanently forbidden as the ice had given way, even in cold weather, the cause...salt. 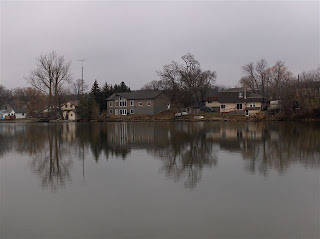 Yesterday, an overnight freeze in Toronto caused black ice, and there there were multiple pileups throughout the city during the early morning rush hour. I have ended up in the ditch on an icy road, thankfully with no injuries or damage to my vehicle.
Road salt is essential in maintaining safe roadways when there is ice and snow. In the year 2000, 5,000,000 tons of road salt were used on Canadian roads in the winter. Salt leaches into lakes, streams, and groundwater and its effects are the object of ongoing study. Year upon year of road salt use has to have a cumulative effect on the environment.
Global warming has been a fact since the end of the ice age. Its cause and long term impact continues to be debated by scientists. There is no argument though when it comes to the immediate effects of road salt on vegetation, automobiles, road surfaces, streams, rivers and lakes.
I want to travel safely in the winter time, but at what cost?
Posted by Ruth at 6:58 pm