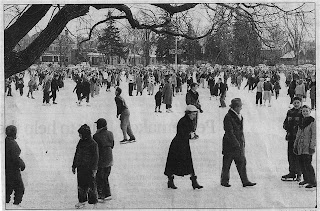 According to today's edition of our local paper, this December was the warmest in the 35 years of record keeping in our region. The average temperature was 0.5 C which explains the lack of ice and snow. In my last post, I mentioned the downtown lake which was used for skating each winter until very recently. This picture from today's newspaper was taken the year I was born. When I moved here in 1970, we spent many hours skating on the lake. I took this picture of the same body of water very recently, and this is what it looks like tonight. You had better rent a canoe at the boat house rather than lace up your skates. 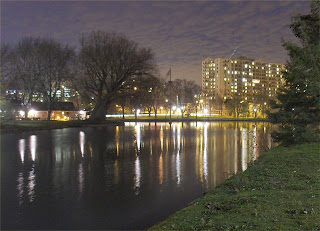 Last winter, the local ski club was open from the first of December until the end of March. There was sufficient natural and man made snow to keep the skiers and snowboarders happy every day in this period of time. Ski resorts rely on Christmas and spring break customers for profits, but it looks as if this winter break will continue without a significant snowfall. The ski club is a short walk from the hospital, and this sign shows the frustration of the management. They have made snow on cold nights, but rain and warm temperatures in the daytime have melted it quickly. 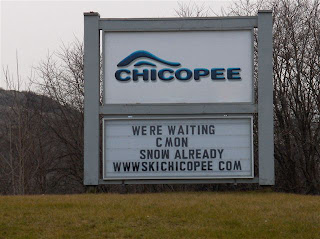 The last exceptionally warm winter I remember was in 1982, and we have had some very cold, long winters since then. I prefer good cold weather with plenty of snow rather than temperatures near freezing that increase the risk of ice storms. If it does not get colder soon, my daffodils will be up. I noticed iris shoots and spring lettuce growing this week in the garden.