Each New Year, Britain's Poet Laureate is supposed to write an official verse of commemoration and celebration. Many famous poets have held this royal post, including Lord Alfred Tennyson from 1850 to 1892. One stanza of his very long poem In Memoriam, is the well known "Ring out, wild bells..."
Church bells rang regularly in years past, signaling the time and passage of important events. Our old city hall had a large clock and bell tower that gave a sense of history to our community. In the early 1970's, "progressive" planners had the city hall torn down, ripping the heart out of the downtown core. 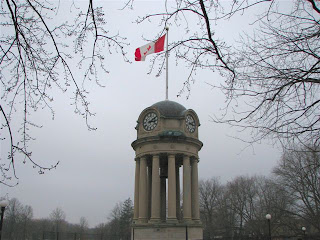 The clock tower was placed in a downtown park several years later, where it stands as a decapitated monument in a field. I took a photograph of it this weekend, and noticed that the clock stands still shortly after 3 o'clock, and the bell no longer rings.
Ringing out the old each New Year is like a purifying ritual. New goals and resolutions are recorded and people look forward to a fresh start in life. However, the old also has value and lessons that have been learned, perhaps the hard way.
This New Year, let us ring out the sorrow and darkness of the old and ring in the hope and light of the new. 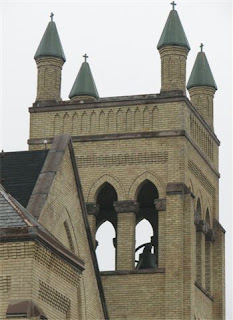