Lunacy and the Full Moon 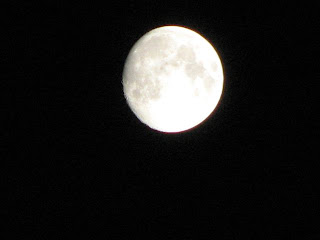 We have had a few clear evenings lately. I was able to take this photo of the moon a couple of nights ago, just before the full moon of December 4th.
At work, a few patients seemed to be more anxious and agitated yesterday and more than one person said, “It must be a full moon”. Our psycho-geriatric unit has many confused and sometimes aggressive patients who have been admitted for assessment and treatment. Yesterday, one man was very angry at me for not allowing him out of the locked unit. He pursued me with his walker while yelling, Jezebel! Jezebel! To be sure, this is a new name for me.

There have been many studies done investigating the link between moon cycles and human behaviour. The effects on animals may be a little more certain, with one study showing more dog bites during a full moon than at other times. While there is no conclusive scientific evidence that would support a claim of “lunacy”, those who work in emergency or police departments often provide some interesting circumstantial evidence to the contrary. 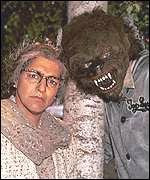 Historically, there has been a link to moon phases and abnormal human behaviour. According to this BBC article, the link between the Moon and madness was acknowledged in the 1600s by Sir William Hale.
He wrote, "The Moon has great influence in all diseases of the brain, especially dementia." The Lunacy Act of 1842 built on this "logic", and as recently as 1940 a soldier who was charged with murder pleaded "moon madness".

A more certain phenomena seen in those with dementia is called sundowning. People with dementia may become more confused, restless and insecure late in the afternoon or early evening. They are often more demanding, restless, upset, suspicious or disoriented and may be subject to hallucinations. We see this frequently on our unit, starting at about 4PM in the afternoon. These behaviours are linked to fatigue and over stimulation and they can sometimes be prevented with an early afternoon rest and a soothing environment. Small children can exhibit similar “fussiness” in the late afternoon and evening.

People continue to report links between the environment and physical and mental function. There are those who feel coming weather changes in their joints even though science has not been able to explain this either. I know I will continue to hear stories from professionals who anecdotally support the full moon behaviour theory. Do I believe them?? Some days, yes!

"There is something haunting in the light of the moon; it has all the dispassionateness of a disembodied soul, and something of its inconceivable mystery." Joseph Conrad