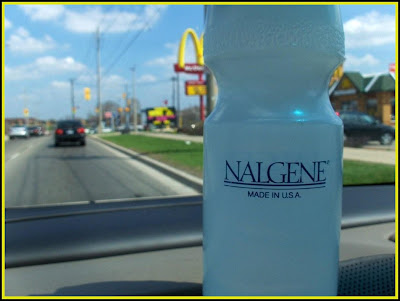 When I was in Junior High School, Mom bought me a Thermos bottle for my lunch time beverage. It had a glass liner and if dropped, the interior would shatter into a mess of fine shards. She had to replace the liner more than once and when plastic bottles became available, they seemed like a cheap and safe alternative to the old fashioned beverage containers.

On Earth Day the Waterloo Region District School Board voted to ban the sale of plastic water bottles in schools as of 2009. This is to be done to make an effort to reduce the consumption of plastic. One of the trustees, Ted Martin is quoted in our paper as saying, 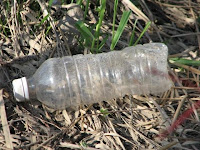 "People who complain about spending $1.20 on gas are spending almost twice that on water," he said. It takes more water to manufacture a bottle of water than can be held in that bottle. What's more, nearly nine out of 10 water bottles aren't recycled, even if they're placed in blue boxes, because nobody wants to buy used plastic, Martin said.

"We're creating far more plastic than can be recycled. . . . We have to pay people to take it away."

On August 15, 2007 the same paper reported that the region sent 680 tonnes of mixed plastics to Asia last year because the waste is not recycled in North America. And plastic water bottles are being used more than ever around the world.

We have used a water filter system at home for many years. I do trust the safety of our municipal water but dislike the taste of chlorinated water, especially in my tea. When I travel I take a portable Brita or Pur water filter bottle with me. Bottled water is not regulated for purity but our city water is tested regularly. I have used a Nalgene bottle for carrying water for a long time too and am very reluctant to use disposable plastic bottles. If I do need to buy drinking water I purchase a four litre jug and fill reusable containers.

Earlier this month , plastic bottles containing Bisphenol A, or BPA, were listed as a health hazard as some studies have linked them to breast and prostate cancer, infertility and premature puberty. Baby bottles made with BPA will be banned in Canada as the chemicals can leak out especially when the bottles are heated. Many stores have removed the popular Nalgene water bottles off the shelf as well. The hard plastic coloured bottles that have a recycling number 7 on the bottom are the polycarbonate plastics that are considered dangerous. My soft, opaque Nalgene bottle shown in the picture above does not contain BPA.

Local sports stores are now stocking stainless steel water bottles. If the hard Nalgene bottles are used for cold water, not hot liquids or acidic foods, they are considered reasonably safe for adults. However, who knows what next year's health studies will reveal. Many plastics leach chemicals when heated, especially if used in the microwave oven.

In my last post I endeavored to reduce my use of plastic bags and containers this year. This is difficult as virtually everything we buy is packaged or double packaged in plastic. But we don't have to buy plastic water bottles. I make iced tea in the summer and don't drink soda so we use a minimum of plastic from these types of beverages. We will continue to put plastic in the recycling bin, but it is disturbing to know that my it may end up half way around the world.

I will have to remember my growing up days in the 1960's when we had paper grocery bags, tin garbage cans and used glass containers. Perhaps the old ways were best.

Check out KGMom's post from earlier this month called
Fouling the Nest.
Posted by Ruth at 9:55 pm