More Herons at the Rookery 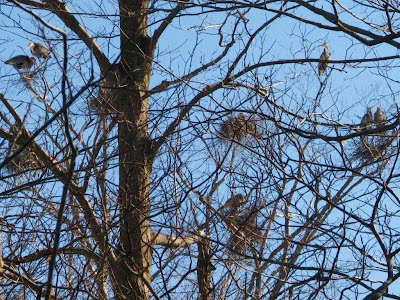 My picture of one tree at the Great Blue Heron Rookery (click on picture to enlarge)
About three weeks ago I wrote about the heron rookery located north of the city. When I first visited it, the nests were clearly visible but I saw only one heron at that time. Things have become very active since then. My husband and I went there about 10 days ago and I took the picture above which gives a general idea of the number of nests these birds make in each treetop. And what a racket they make! 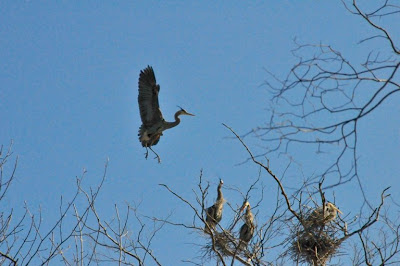 One of Andre's first pictures of the rookery

My husband's co-worker, Andre, who let me use his ice fishing pictures earlier this year, asked me about the rookery. It is very close to their workplace and he went out there with his new camera. This was his first time taking bird pictures but he has been back three times now. I think he is seriously hooked! Each set of pictures is better than the last. His Flickr photo stream is here and he has kindly allowed me to use some of his shots in this post. He has other excellent shots that are worth viewing on his site. 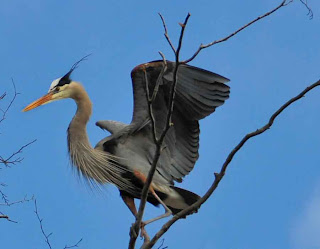 A picture from Andre's latest outing

I could stand and watch these large, graceful birds for hours. They have a fair distance to fly to the river and there is constant travel back and forth for food. When we drove by a section of the river which was about 10 km away, we saw five herons fishing along the bank of the fast flowing water.

There is much to see in the spring and things are progressing so fast that it is hard to keep up with what is new from day to day. I will have to check by again and see how long the rookery is occupied and when the birds fledge from their aerial nests.