A New Season at Mount Trashmore 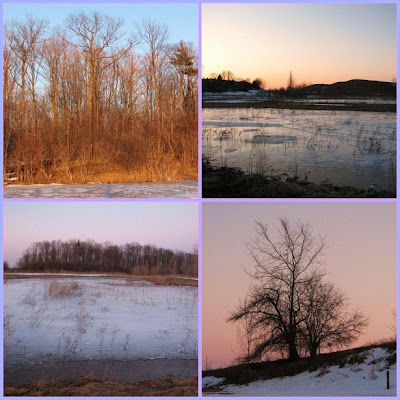 We have had a day or two of rain this week with milder (not warm!) temperatures and the snow cover is gradually melting. The rivers are dangerously high and the trails along them are under water in spots. It was impossible to walk the trails near the hospital today.

Last year I wrote about the old landfill site at the end of our street known as Mount Trashmore. This is a favourite place to walk the dog, but the snow has been too deep and icy underneath over the past month to walk safely. We ventured out tonight in the evening just before sunset. The ground was snow covered, icy, muddy, water logged or dry so it required creative criss-crossing to get through without incident. 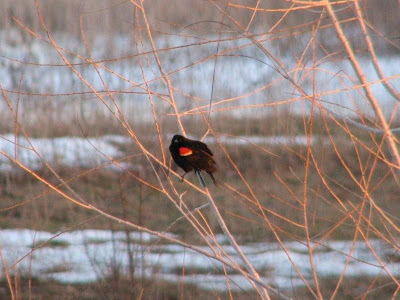 The city has been developing the one end of this park and I wondered if the birds that nested here last year would return. The Red-winged Blackbirds are most vocal in the evening and several males are now present. I haven't seen any females yet. In the dusky light I startled six Kildeer, the first I have seen this season. 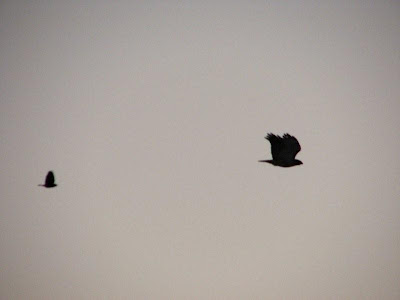 A large hawk swooped over the field repeatedly. Each time, a group of small birds would rise up together and chase it noisily until it found another perch from which to launch its next attack. 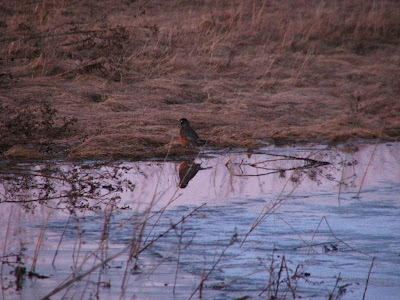 There are a number of vernal pools in the park that will hold water until early summer. The edges of the ice are just starting to melt. The robins, kildeer and red-winged blackbirds grouped near the open water, digging in the mud or having a bath.

I did a mini-Bioblitz in the field last year for Earth Day and hope to identify more species here by the end of April this year. Last year at this time the female RWBs were nesting, I had found skunk cabbage growing, the red maples were blooming and the winter snow cover was gone. The spring season is delayed in comparison this year, but a couple of weeks of seasonal temperatures should allow a reasonable catch-up.
Posted by Ruth at 12:00 am