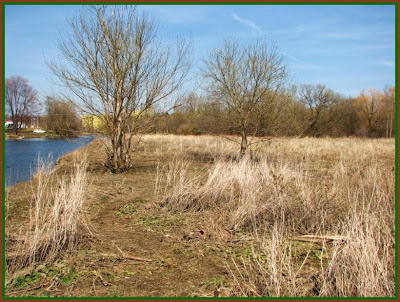 Last week I tried to walk the trail along the river here, but everything was flooded far beyond the flood plain of the top picture. The trail, which is a distance out of the picture to the right, was completely under water. Last year I found my first Skunk Cabbage flowers here but of course I found nothing at the same time this year. Yesterday I returned and the water is flowing within the river banks again. I walked along the river's edge in very muddy and marsh-like terrain and found what I was looking for. It was worth another "foot soaker". 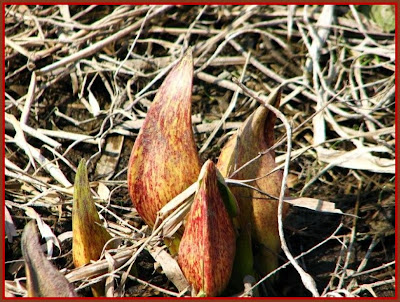 These Skunk Cabbage hoods or spathes contain a flower which reportedly smells bad and attracts insects. I never took a sniff. And I didn't kneel in the wet ground to get a macro shot of the flower that is contained inside the coloured leaves. Some of the Skunk Cabbages were larger and appeared to have been eaten by something. The unpleasant smell is suppose to deter larger animals from nibbling on it, but some creature had taken a taste. 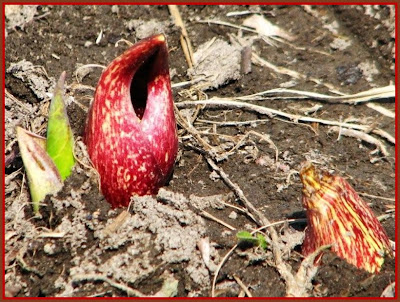 So my first wildflower of the season has made an appearance. I enjoyed watching the large green leaves unfurl as spring and summer progressed last year. It was 20 C today and tomorrow promises to be warmer. The other wildflowers that must bloom before the tree leaves open will be emerging quickly. Later in the evening I saw a patch of Coltsfoot as well. This Song Sparrow was sitting on a branch of a flowering maple tree near the river. I mentioned the Red Maple in last week's Friday Flowers post. Jennifer at A Passion for Nature wrote in much more detail about the flowers of this tree this week in a post called Oh Those Sexy Red Maples. She also wrote about Skunk Cabbage in this post earlier in the month.

I should have flowers blooming in my garden this weekend as the daffodils and hyacinth buds are getting large and colourful. I have never planted early bulbs like crocus and snowdrops. Anvilcloud, another Ontario blogger posted these beautiful crocus pictures this week that are well worth viewing. I know everyone is enjoying the spring blooms after a long winter.
Posted by Ruth at 12:00 am