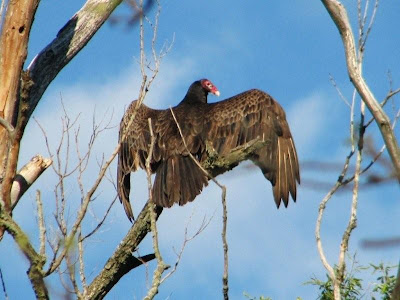 These pictures were taken the same evening I saw the Red-winged Blackbird attacking the Red-tailed Hawk. On the hospital grounds is a large house that was once part of the TB Sanatorium. It is in sad disrepair with a big hole in the roof and is situated fairly close to the river. It is not unusual to see several Turkey Vultures perched on the building and this evening, six of them were lined up. As we walked down the trail the birds flew off and landed on some dead branches ahead of us. The vulture above sat with wings opened in the evening sun. 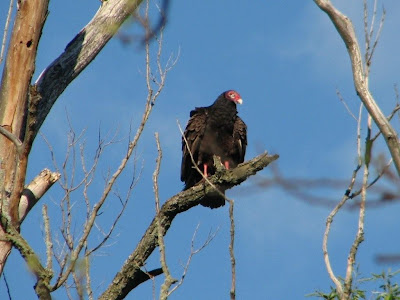 Another one took a less spectacular pose nearby. The group continued to move ahead until they got to the river and gathered on a rocky shoal near the bridge. I admire how these homely looking birds can soar so elegantly in the air. 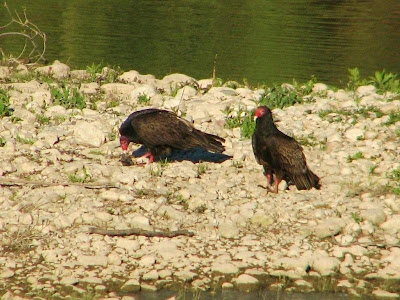 We crossed the bridge and approached a hydro pole right on the trail where a pair of Osprey are building a new nest. A few weeks ago we watched them near the hospital as they broke branches off the tops of dead trees while in flight. This building project continues. 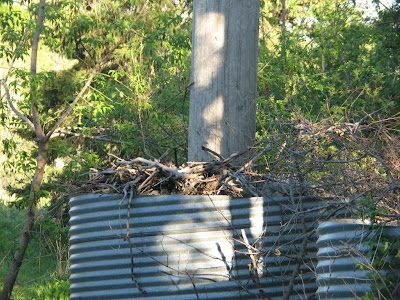 Below the nest and under the pole the trail is strewn with branches that have fallen to the ground. I would call this pair beginners. There are other Osprey along this river who tolerate human activity without too much anxiety. These birds start making a lot of noise when people are approaching the nest from a distance on the pathway. (It is a public trail) As my daughter and I came closer, one of the birds flew out, hovered over us and dropped a big stream of fecal material directly at us. 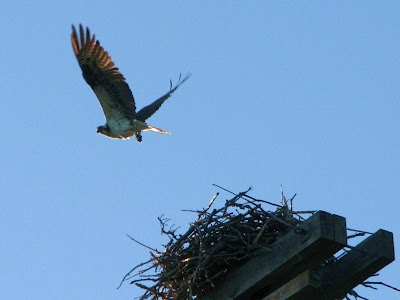 Fortunately it was windy and the stream overshot us, but my daughter ran very quickly in the other direction. I would not purposely harass a nesting bird and did not stay around long but I do hope they get used to people soon.

I have difficulty spotting little warblers and vireos in the trees, but these big birds are hard to miss.

Note to Cheryl... In your comment yesterday you mentioned the eagle nest that is supposed to be at the river near Breslau. I am sure this is an Osprey nest. There are four Osprey nests on the Grand River that I know of between Bloomingdale and Cambridge.
Posted by Ruth at 12:06 am