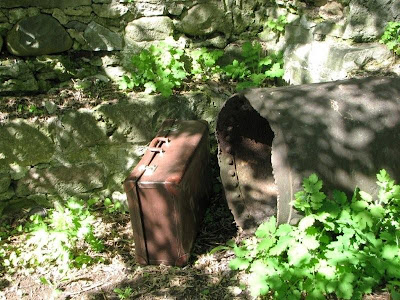 I have mentioned more than once that I enjoy good mystery stories. My personal library has a number of classic "who dunnits" and our video/DVD library has many Poirot, Miss Marple and other BBC mysteries.

Most of the time I can make sense of what I see every day and I am not on the lookout for trouble. Some things do puzzle me and leave me asking questions that may not have obvious answers. Last spring I saw a dark shape in the river from the bridge near the hospital. My first thought was that it was a body. I noted the date and time and then talked myself out of the silly notion when I should have called the police. Two weeks later when the water levels had dropped, a body was found in that exact location. (death by misadventure) But most of the time my mysterious findings are far less concerning. Recent finding include...

...a suitcase beside an aluminum drainage pipe along a river trail. I took a picture of it, listened closely for any ticking, but did not have the courage to open it. I left wondering if a pile of unmarked cash was inside. Or perhaps it contained something else I really didn't want to see. 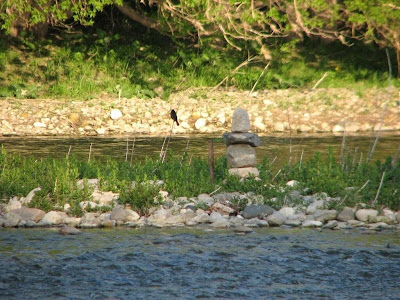 Along the same trail I noticed an Inuksuk on a rocky shoal in the middle of the river. Who built it and how did they get there? It is too deep to wade there so a canoe or boat must have carried the people who piled the stones up. 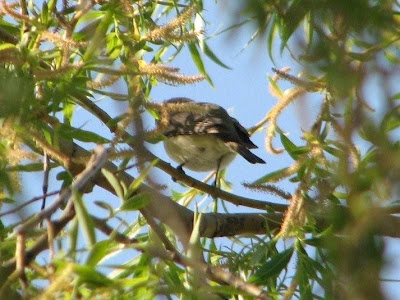 I have many pictures of "bird butts" taken from my angle twenty or thirty feet below the tree tops. This mystery bird did not give enough clues from the backside for an identification. Fortunately I did see it with my binoculars another day in the same area and recognized it as a Warbling Vireo. But I have many other underside pictures I do not recognize. 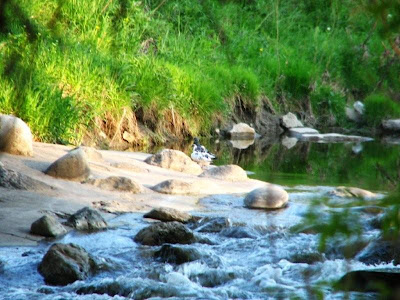 This blurry picture is of a "mystery gull" I pursued for several minutes. It was white with a black tail and it flew out from under the bridge three times as it was chased by another similar bird. When I got home the picture showed three black and white pigeons. What else would fly out from under a bridge? (Cheryl, I was taking this picture when I first noticed you and Roxie on the other side of the creek)

One final question...Would you have opened the suitcase???

Jaspenelle is truly intrigued and posted this response to the suitcase mystery.
Posted by Ruth at 5:06 pm