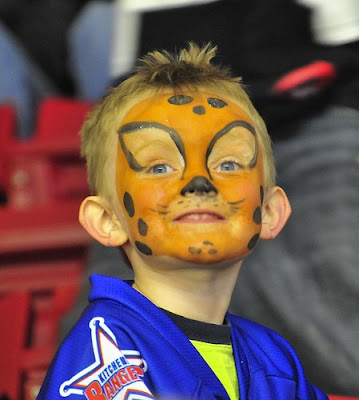 Young Kitchener Rangers Fan
(All photos courtesy of Andre)
This is the Memorial Day weekend south of the border and the weather here is absolutely gorgeous. One week ago our Victoria Day long weekend was accompanied with rain, snow flurries and cold winds. And they call it the first long weekend of the summer season. Go figure! 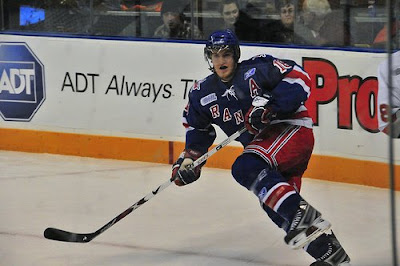 My husband is an avid Rangers fan and rarely misses a game. He travels to out of town games when possible including games in Erie PA, Saginaw MI and several Ontario cities. I would be happier if hockey games were two periods long instead of three and I don't know the difference between "offside" and "icing". But I am interested in the history of the tournament. Andre has kindly allowed me to use some of his terrific game photos. 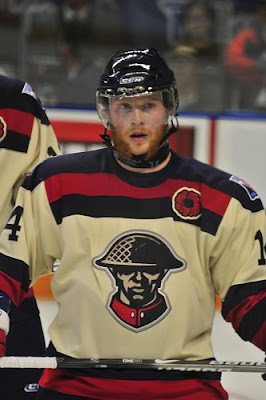 The Memorial Cup was donated by the Ontario Hockey Association in 1919 as a memorial to the Canadian dead of World War One. I never knew the history of the cup until our local team introduced special jerseys for the first game of the tournament. Some people think that a memorial to war dead should not be associated with something as trivial as hockey, but I think that any method of respectful remembrance for future generations is a good thing. 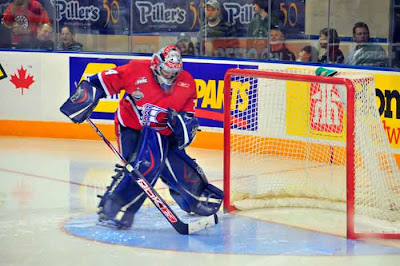 Spokane Chiefs' Goalie Dustin Tokarski
The Kitchener Rangers will play in the final tomorrow afternoon against the Spokane Chiefs. Spokane is the only undefeated team in the tournament so the game should be exciting. My niece Jaspenelle lives in Spokane and wrote a short post after she went to one of their games this past season. 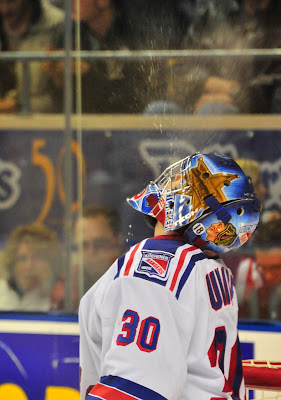 Kitchener Rangers Goalie Josh Unice
Junior hockey is very popular in Canada and the fans are very enthusiastic. My husband plays goal in the Old Timer's League and is very proud of the the performance of the young Kitchener goalie Josh Unice. He had a 9-0 shut out in Friday's semi final game.

So who will win tomorrow's championship? Kitchener or Spokane? Check back tomorrow to find out.

And here's wishing our American neighbours and fun and safe Memorial Day weekend.

Email ThisBlogThis!Share to TwitterShare to FacebookShare to Pinterest
Labels: family, people and places, sports, this and that