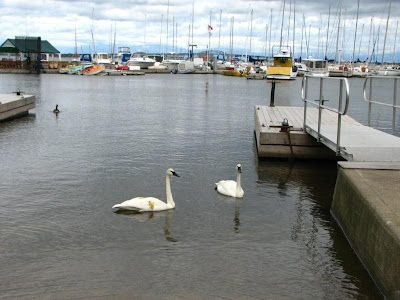 Burlington Bay- Burlington Skyway in the background
My daughters wanted to go to IKEA this weekend so we headed out to the nearest store in Burlington, about 40 minutes from home. The day was rainy and cold but when we came out of the store the clouds were breaking up. The driver (me!) announced a stopover at a local park on Burlington Bay which is part of Lake Ontario. LaSalle Park has an interesting history and now has a marina, recreational facilities, and nature trails along the waterfront. It is an important winter migration area for many waterbirds and local photographers have posted impressive photos of a variety of birds seen last fall and winter. I didn't expect to see anything special as the over-wintering birds returned north a few weeks ago. 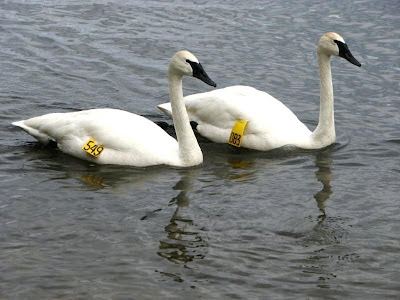 From the parking lot I saw a large number of swans in a small cove and was very surprised to find Trumpeter Swans for the first time. They were all tagged and I spoke with a lady who was doing a daily count of the flock. There were 25 swans present today down from the 100 or so that were present in the winter. She told me the mating pairs had already gone and these were young swans who had not yet started breeding. They do not mate until they are 2-3 years old. 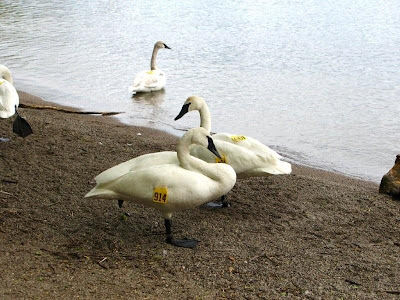 Trumpeter Swans came to the verge of extinction in the early 20th century due to over hunting. They have been reintroduced in several areas and their numbers are increasing to the point where they are no longer endangered. They must be taught to migrate and this has been undertaken in some locations by humans in ultralight planes. A group of volunteers buys corn and feeds the flock at LaSalle Park over the winter. The lady I spoke with was in her 70's and she told me the organizer of the group is in his late 80's. He still comes and tags any new birds that show up in the bay. The swans are not being fed right now and have plenty of food available in the natural environment. 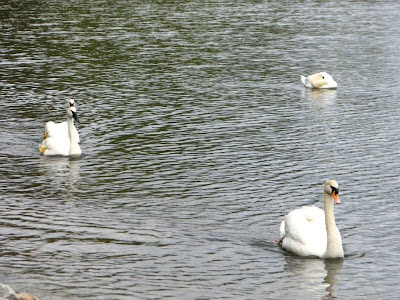 There were Mute Swans in the bay as well but the Trumpeter Swan is a native bird unlike its introduced European cousin. The Trumpeters were quite vocal and are well named for their call which some compare to the sound of a French Horn. 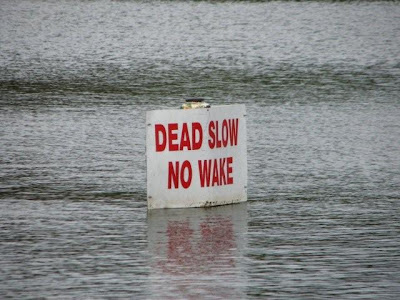 Observe the speed limit!
LaSalle Park has a variety of habitats including lake front, marshes and Carolinian forest. Signs were posted along the boardwalk with information on the history and natural environment of the area. Apparently the shoreline here was full of rattlesnakes in the past. There are some things about "progress" that are fine with me! I like the posted speed limit at the marina. I am sure the sign could have a variety of meanings in other locations.

I will be a driver again for anyone who wants to go to IKEA if they agree to a stop-over at the bay.
Posted by Ruth at 6:51 am