Clues from the Past

Our region has hundreds of kilometers of well groomed walking trails that I explore several times a week. The Walter Bean Trail is 73.5 km long and follows the Grand River from West Montrose to Cambridge. Signs at the various access points offer information on the history and geography of each trail section. The section I walk most often is near the hospital because I have an hour off at lunch time, or am able take a stroll to unwind at the end of the workday.

Last week I featured the Bloodroot in the Friday Flowers feature. I had found a large patch of these flowers near the hospital and Mon@rch suggested that this may have been an intentional planting. This got me thinking about the history of the land that the trails cut through today. 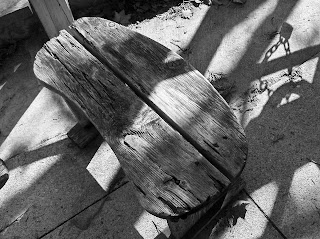 This area was settled by Mennonite farmers in the beginning of the 19th century as they came by covered wagon from Lancaster and Bucks Counties in Pennsylvania, north to Ontario. Most of the early settlements were along the Grand River and other rivers in the watershed. The Shantz family settled and farmed near the river at Freeport.

In the late 19th century, tuberculosis was widespread, often affecting several members of the same family. In 1908, a local chapter of the Canadian Association for the Prevention of Tuberculosis was formed and there was a drive to have a sanatorium built in the area. One of the main leaders of the anti-tuberculosis movement was Reverend F.E. Oberlander, a man who had lost eight member of his family to this disease. It was difficult to find a suitable spot for the proposed hospital as there was a "not in my backyard" mentality in the community. 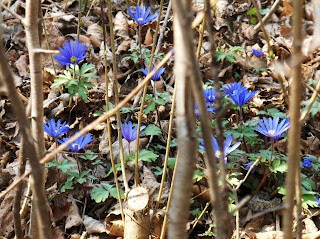 Windflowers (Anemone Blanda)
Finally the Shantz family's offer to sell 15 acres of their farm along with the large stone farmhouse for the sanatorium was accepted. The farm house was renovated in 1916 and was the first building of many built on the property as the facility grew in size. The staff, including the superintending physician lived on site. The daughter of one of the physicians wrote,

"I remember a big apple orchard by the river. The apples were given to the patients. There were cows to give fresh milk and hens whose eggs were also for the hospital."

The apple trees are still by the river, overgrown and neglected beside the trail. I imagine there would have been gardens for vegetables and flowers. After all, patients often stayed here for two to four years being treated with fresh air and good, nutritious food. Their beds were on porches with windows on three sides. At night the windows were opened in all seasons, and the patients wore hats and mittens to bed in the cold weather. 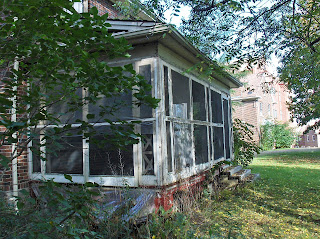 The hospital property is large and there are sections of bush with areas of naturalized vegetation near the old and sadly decaying houses that once were used as staff homes. I found chives, peonies and iris poking through the ground last week, and plenty of wildflowers, violets, bloodroot and trout lilies. I took photos of two different blue flowers and could not find then in any wildflower book. After thinking about the history of the farm and sanatorium, I looked in a garden book and discovered the names of these intentional plantings. 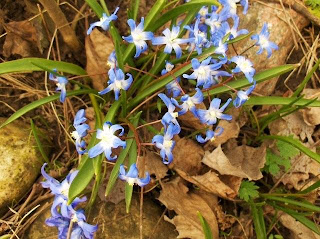 Siberian Squill (Scilla Siberica)
When I am walking I will not assume that every flower or tree is a natural feature. There will surely be signs of previous human settlement that I have missed in the past, perhaps a well, or a landing, an orchard or a garden. One area of the trail has the best black raspberries growing wild in July. When I pick a few to eat, I will remember the people who planted them and picked them to live.
Posted by Ruth at 12:01 am