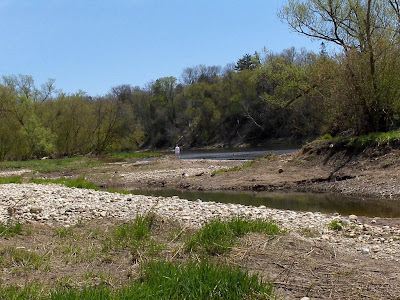 The water levels in our streams and rivers have decreased significantly in the past few weeks. The river below the hospital recently covered the land shown in the above picture and the two little islands where the trees are growing were surrounded by deep, rushing water. Today at noon I walked on dry land to the far island in the top left of the picture. I met only one other person, the young pregnant woman in the distance walking her little dog.

With the receding spring run-off, the river has given up two bodies in the last fortnight. First, a woman missing since January was found a short distance downstream, badly decomposed and the victim of violence, likely by the hand of an acquaintance. A few days later, the body of a university student was found right here by this rocky shoal, a death by misadventure. I looked at the closely raked ground today that had been searched diligently by the police looking for clues and realized I could have been the one to make the sad discovery. 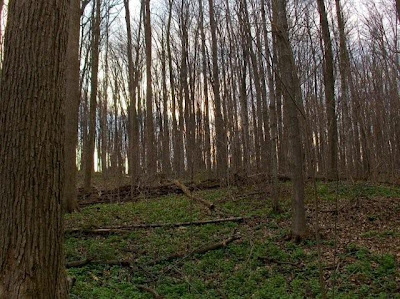 I spend a lot of time walking trails in and around the city where there are very few people. I don't feel afraid or anxious, even when alone without the dog or a companion. My father recently eyed some of my stomping grounds with caution, deeming them unsafe for solitary exploration. I never walk with earphones and am alert to sights and sounds around me. I make eye contact with people I pass and always greet them in a friendly manner. If I am alone, I carry my cell phone in my pocket. I trust my intuition and if I feel the least bit uneasy, will turn back immediately.

The media feeds our fear with an abundance of stories about crime, whether on the news or in investigative documentaries. Fear is a powerful emotion which can be protective, or leave us paralyzed and paranoid in our surroundings.

Who can predict where we may find violent and unstable people? It could be in a classroom, an office, a home, a busy city street, or any other public place. I am more likely to encounter violence within the hospital than I am along the river's edge. Most murders in our area (and there aren't many) are domestic in nature.

In my travels I have felt fearful in a few situations, usually in urban areas. This past winter a number of Canadians have been victims of violence on the west coast of Mexico. Travelling as a tourist in areas where there is economic disparity and drug trading increases the risk of being a victim of violent crime.

Yesterday, our bank which is one kilometer from our home, was held up with pen and paper. The unarmed thief presented a note to the teller who gave him money as he requested. What power he had using fear generated by the memories of the violent bank robberies we have all heard about. (He was caught a short time later a block away after a fearless 13 year old boy discovered him hiding from police in his family's backyard) 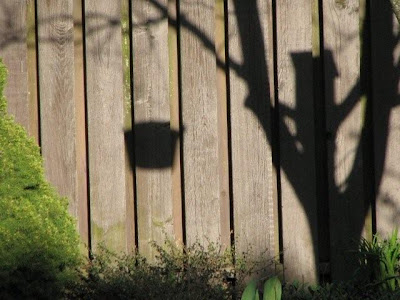 We can be controlled by many fears including crime, terrorism, climate change, health concerns, food contamination, environmental hazards, lack of acceptance by other people, and death to name a few. Politicians, advertisers, employers, and religious leaders can be expert users of these fears. No wonder many people live with a sense of hopelessness and and anxiety.

I had many fears as a child. One of the first Bible verses I memorized was from II Timothy 1:7.

God has not given us a spirit of fear, but of power and of love and of a sound mind.
I have repeated the words to myself many, many times. There will be shadows of uncertainty in my life, but I want to face each day with confidence and faith, not cowardice and fear.
Posted by Ruth at 6:32 am