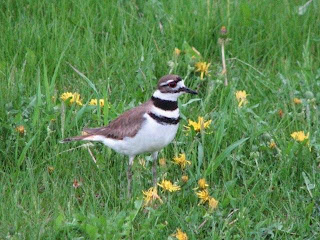 I have been watching the Kildeer in the field near our home since early April. Generally, they have been easy to see, especially before the grasses started growing again. Last week, we were walking on the pathway and this Kildeer came toward us at an usually close distance. As we kept walking , the bird's distress became more evident and I knew we were near the nest. The dog was along, and when I did not see the nest readily, we proceeded on our way home. 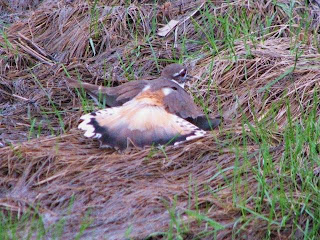 The bird did its dramatic broken wing act with lots of noisy overtures and after we were a safe distance away, it returned to the nesting area. 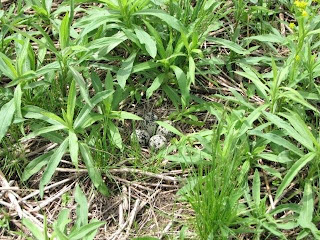 The following day, I went to the field by myself and found the nest easily. Four specked eggs lay in a small depression in the ground. I did not get too close and used the zoom on the camera to take the pictures. 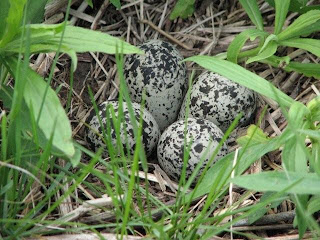 It seemed improbable that these eggs would stay undiscovered until hatching, and that the nestlings could be safe from predators out in an open field. The brave actions of the parent were the main protection for the eggs as the bird offered itself as bait to a predator. I will not let the dog roam free in the area for a while until I am sure the nesting period is over.

On another walk last week, this time near the hospital, my walking partner found this tiny egg on the sidewalk. It was intact, but had a small hole started on the one side. The shell broke easily and this fully formed bird was dead inside. It looked as if it had started to break out of the shell, but had fallen from the nest. 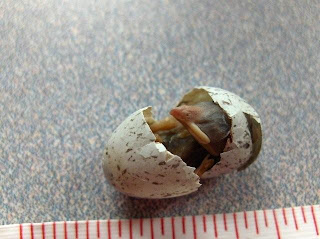 I think this is a Nuthatch according to the size and colour of the egg. Perhaps it had fallen from the nest with the movement that comes with hatching, or with the wind.

It would seem that a nest in a tree would be safer than one on the ground, but either way, there are many risks to overcome before a bird comes to maturity. I wonder what percentage of nest eggs this spring will end up as healthy, adult birds?

The Kildeer's field is to be transformed into two soccer fields and a parking lot in the next year;- another habitat lost because of the biggest predator...man.
Posted by Ruth at 12:00 am