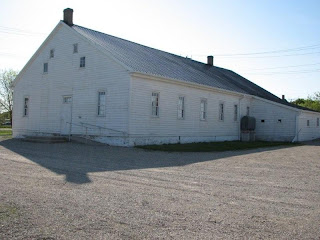 Our family moved from Toronto to the Waterloo region in 1970. My parents made some new friends in the area of Hawkesville and we attended church at the moderate Mennonite church in that small rural community. On the way there, we passed the Martin Mennonite Meeting House which was within the Waterloo city limits. This congregation, who had arrived from Pennsylvania, started meeting in 1824. The first meeting house was built here in 1848. I remember the Old Order Martin Congregation arriving by horse and buggy on alternate Sundays. Every other Sunday, the Markham-Waterloo Mennonites arrived in their black cars. Both congregations shared the building for many years.

The city has grown significantly in the past 30 years and the area around the meeting house and large cemetery is surrounded by malls, offices and auto dealerships. For a period of time, there was a strip club right across the road, but this is now the site of a large Orthodox church and banquet hall. 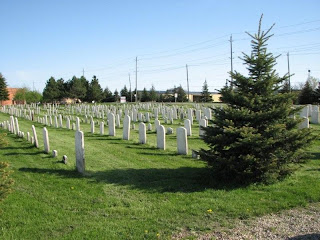 The Old Order Mennonites stopped using this building in 1993 as the traffic conditions were too busy for horse-drawn vehicles. The building was used for funerals until 2001, but is now vacated completely even though the grounds are well maintained. The simple building looks out of place in the urban landscape. 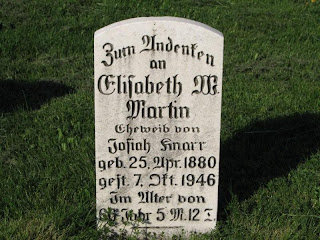 I love old cemeteries and the history that they record. The name Martin is one of the top six Mennonite surnames in the area, the others being Shantz, Eby, Baumann, Weber and Snyder. The Old Order Mennonites are buying farms north and west of here to escape the busyness of the growing city. It is very unusual to see a horse and buggy downtown now and essential trips are made by bus, or with a neighbour who has a car. When we visited Lancaster County in Pennsylvania a couple of years ago, we found the Amish community was promoted strongly as a tourist attraction. The OOM in this area seem far more private and tend to move away from the curious stares of visitors.

This historical landmark will remain as a ghost town, and remind us of the hardworking people who settled this area and contibuted to its unique heritage.

(Here is a link to a site called From Pennsylvania to Waterloo, a biographical history of the Mennonites in this region.)
Posted by Ruth at 12:01 am

Email ThisBlogThis!Share to TwitterShare to FacebookShare to Pinterest
Labels: Mennonites