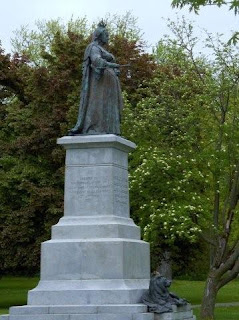 Our downtown city park is named Victoria Park after the long reigning monarch, Queen Victoria. Her stern, regal, matronly likeness dominates the park entrance. This community began when Mennonite settlers arrived from Pennsylvania. Afterwards, many people of German origin came and established a number of successful manufacturing operations in the area. The town of Berlin was incorporated as a city in 1912 and was considered to be Canada's German capital. After the start of the First World War, there was pressure to change the name of the community. In 1916, Berlin was renamed Kitchener, after Lord Kitchener who was killed in 1916 when his ship was sunk by a mine. In spite of the strong German heritage, there was obvious affection for the British monarchy.

Queen Victoria was born on May 24, 1819 and reigned from 1837 until her death in 1901. The Industrial Revolution was at its peak during her rule and Britian was the global power of the time. Her birthday was a national holiday and has remained so in Canada to this day. Victoria Day is celebrated on the Monday before May 25th and is the unofficial start of our summer season. It is the weekend that gardens can be planted as the risk of frost is supposed to be low. (We have had a few night time frosts this week though!) Our provincial parks open for the season for the many campers who wish to brave the usually cool night time temperatures. 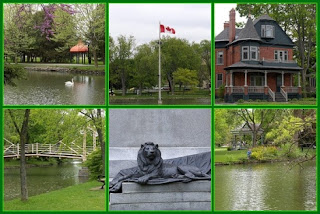 We enjoy our beautiful downtown park. In past generations it was the gathering place of the community, with ice skating in the winter, live bands and dancing in the bandshell in the summer and canoe rentals on the small lake. Stately old homes surround the park and the style is definitely Victorian.

My mother's ancestors were Empire Loyalists who moved to Canada during the American Revolution, and the family has remained royalist. Mom was a few years younger than Princess Elizabeth, now Queen Elizabeth, and shared her name, growing up with her as a role model. The Royal Family has always had a scandalous side, but they are a long-lived institution that has provided a common link for members of the British Commonwealth.

So Hoorah for Queen Victoria, who has given us a holiday today.
Long live the Queen! 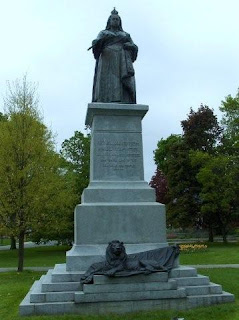 Victoria, Queen, Empress
A Model Wife and Mother Beloved, Admired, Revered,
She shall live the hearts of her people
Posted by Ruth at 12:00 am

Email ThisBlogThis!Share to TwitterShare to FacebookShare to Pinterest
Labels: holidays