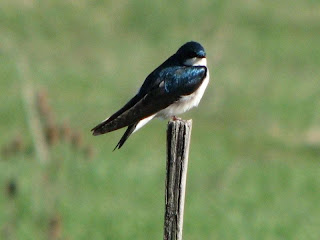 I was delighted to finally see many tree swallows today. One of the river trails has a dozen or more bird houses placed to attract nesting swallows. The last time we walked here on April 14th, they were vacant, but all of them are now busily occupied. I could have watched for hours as the birds went in and out of the boxes and stood guard over their little broods.

Grandma kept a birding scrapbook in the 1940's which has many clippings from the Toronto newspapers abour her hobby. It seems that birding was immensely popular at that time. One of the articles listed all 321 birds found within a thirty mile radius of Toronto, and the average date they returned to the area in the spring. At that time there were only 19 birds listed as permanent residents. I know the environment has changed significantly in the past sixty years and there have been shifts in migration and breeding ranges. The house finch is one example of a bird that was rare and now is very common. 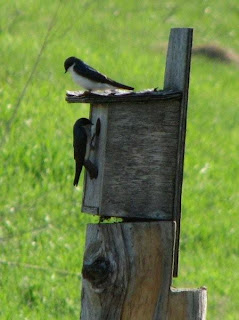 Here are some of the dates that were given for seasonal migration to this area.

Crowds of people will be travelling to Point Pelee, Ontario this month to see returning migrants. The Festival of the Birds runs from May 1st to 21st. This point of land on the north shore of Lake Erie is the southernmost part of Canada, equivalent in latitude to northern California. Warblers will be the big attraction, but many other birds will also pass through this area. 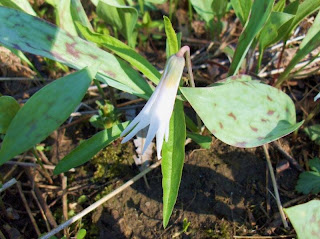 On another note, the area around the swallow boxes was covered with white trout lilies. These flowers are considered to be rare in Ontario. I have photographed many of the abundant yellow trout lilies this week and decided I had enough pictures for this year. But I had to take one (or four) more of these lovely white flowers.

Every day this month is sure to bring a new discovery! 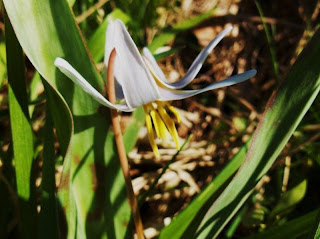