I am blessed with a very capable and loving mother. She was barely expecting me when she and my father left Canada to go to South Africa, in fact, she had not even told her family about the pregnancy. All five of us travelled extensively as my parents did missionary work, Mom always providing a orderly household routine wherever we were. She cooked us healthy food "from scratch", sewed our clothes, home-schooled us occasionally, and still had time to minister to others in her optimisitic and cheerful way. She was trained as a teacher and this is and will always be her natural calling. 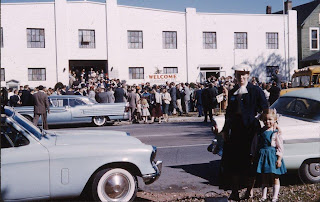 I have very few pictures of Mom and I together. This picture was taken in Indianapolis, Indiana in 1958 or 1959 during a furlough from South Africa. I have no recollection of this church conference, but the many church gatherings we attended all tend to blur together anyway.

We lived in Canada during most of my school years, and I was newly married when my parents and three younger brothers moved to Mexico. Mom tackled the Spanish language for the first time in her 40's and persevered to fluency. Mom and Dad still live there and Mom, at 75 years of age continues to teach at my brother's school. She still travels a lot, speaking at conferences and churches and is planning her second trip to Chile this fall. She will never retire. 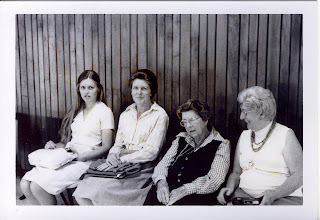 Me, Mom, Grandma 1978
This picture was taken on Mom and Dad's 25th wedding anniversary. Grandma, her friend and I had gone to Mexico and had celebrated the anniversary earlier with the family. We were in the Guadalajara airport waiting for the plane to take us to Dallas and then Toronto. It was no less than eight hours late and we missed our connecting flight, returning home a full day late. Grandma, who was 82, was feigning extreme fatigue as we waited on the bench.

Mom will have seen only one of her five children on Mother's Day. (It is actually celebrated in Mexico on May 10th every year.) But she has the love and affection of the rest of us who are separated from her by many thousands of miles.

To the best of mothers
Happy Mother's Day
I love you!
Posted by Ruth at 2:26 pm