In April, I wrote a post about balance and mentioned the importance of being able to stand for at least 20 seconds on one foot. Adults stop hopping about and lose the agility of youth from disuse. I saw a great example of one-legged standing this weekend.

I am getting to know the habits of the Great Blue Heron that has settled on the river near the hospital. I have taken many pictures of (him) and have determined that this bird does have two legs. 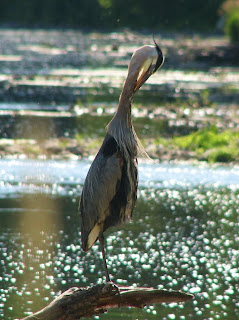 On the long weekend, we went for an early morning walk and the heron was on his favourite log grooming himself in preparation for the day. I took numerous shots as he stood on one leg and preened and stretched and smoothed his feathers.
We left the heron and walked for thirty minutes down the trail. The dog had a swim in the water and we watched the cliff swallows skimming over the water at the next bridge. 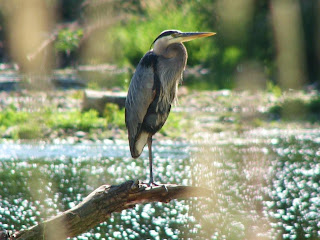 As we walked back to the car, the heron was on the same log, standing immobile on the same foot. I began to be concerned that perhaps he had lost a leg. I later read that a heron will stand still for long periods of time, often with one leg tucked under a wing. How true that is!
I asked my husband if he had ever seen a heron's nest in a tree on any of his fishing trips. He knew of their nesting habits, but had never observed one. 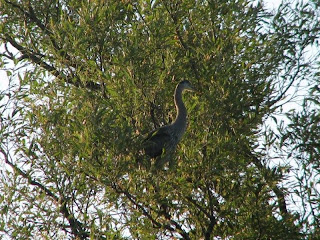 Last evening as I walked a different section of the river, I saw a heron fly up into the high branches of a tree near the shore. I could not see a nest, but it was the first time I had seen this bird in a tree. The sun was low and the lighting difficult for a good picture, but he stayed there for some time. It reminded me of a dinosaur in a tree.

All I have to do now is find a heron rookery. I may be closer than I realize.
Posted by Ruth at 12:00 am