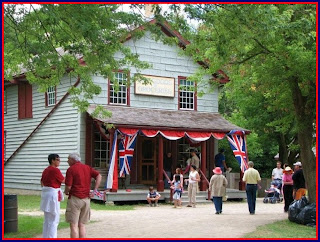 Father C. (Donna's dad) left a comment on yesterday's post wishing me a Happy Dominion Day! I hadn't heard that said in quite a while as Dominion Day was officially changed to Canada Day in October 1982.

A short five minute drive from our house takes us to Doon Heritage Crossroads, a park with a village that re-creates life in this area circa 1914. Over twenty restored buildings stand on the sixty acre site near the Grand River. Today a Dominion Day picnic was held on the grounds and the public was invited to step back in time to enjoy a different pace of life for a few hours. I am on call this weekend, and on my way home after my last patient visit, I dropped in to observe the festivities. 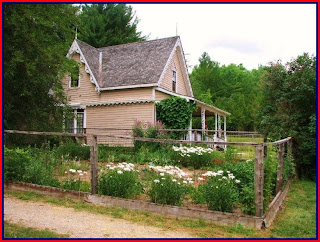 The Dominion of Canada was formed on July 1, 1867 when the British colonies in North America were granted national status in Canada's Confederation. Canada is 140 years old today, very young compared to some other nations in the world. In 1914, there was a strong British identity in Canada. Until our centennial in 1967, the national flag featured the Union Jack. When I entered the village, I was given a Union Jack as part of the celebration.

No one does picnics like the British, and this one had all the features of an old fashioned English summer afternoon in the park. There was food, old fashioned games such as croquet, wheel games and stilts. A band played period music outdoors and people could sit out at the tables or tour the houses and businesses in the village. 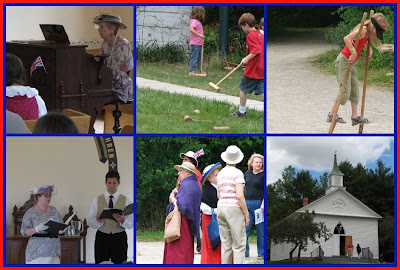 The church was the venue for a concert of Edwardian music, the singers accompanied by the old organ. You could visit the old steam engine at the train station, or see the fire truck at the fire hall. Cows grazed in the pasture, watched by young employees dressed in period costumes.

My daughters are off to the Canada Day fireworks display on the university grounds. This celebration will be diverse and attended by more than loyal British subjects. Canada was just 29 years old when my grandmother was born. I am the 4th generation from Confederation. Our national identity is evolving.

Some of the young people in our church interviewed people on the street this week asking them what it means to be a good Canadian. We watched the video they made today. The answers were varied and included responses like this. A good Canadian....

Oh Canada, Glorious and free
Oh Canada, we stand on guard for thee!