The recent hot, muggy weather has caused a jump in the local mosquito population or perhaps the lack of wind has made them more apparent. I have always enjoyed the shores of the Great Lakes more than inland lakes as there is always a breeze that keeps biting insects at bay.

If you want to see insect eating birds in action, you have to go where the insects are. Mosquitoes really don't bother me much, but this year I have had more bites than usual. A couple of weeks ago, I felt mildly achy and unwell for a day or two and wondered if I had contracted West Nile virus. Infected dead birds and ponds have been identified in our region this season.
I feel 100% well now, and hope that I have been infected, although the chances are very low. An infection gives a person an immunity from the virus, like a natural immunization.
Only 20% of people infected with West Nile virus have any symptoms at all and only 1%, often those who are immuno-compromised, become seriously ill. There are far more serious mosquito-borne illnesses around the world such as malaria and dengue fever. 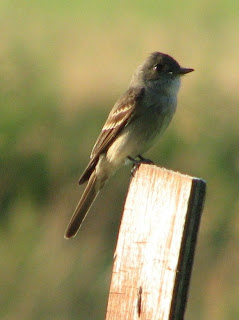 This Eastern Wood Pewee is common along the Grand River. It takes short flights from a perch, in this case an abandoned tree swallow box, to catch insects. They are quite photogenic and cooperative! 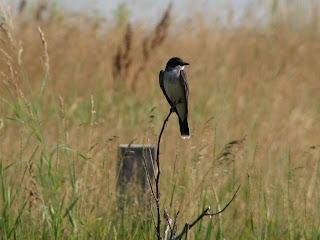 There are at least a dozen Eastern Kingbirds near some old hickory trees along the river. They also take short, acrobatic flights to catch insects. I have tried unsuccessfully to capture a picture of them in flight. They move so quickly! This one kept returning to a dead twig, just for me. 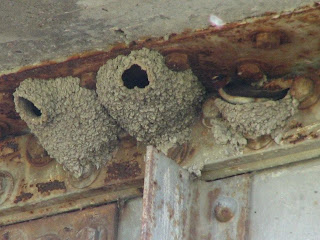 I have seen plenty of bank, cliff and barn swallows skimming the water. I had posted pictures of a nesting colony under a bridge near the hospital. I almost missed these nests under a rusty bridge that blended well with their rusty colour. 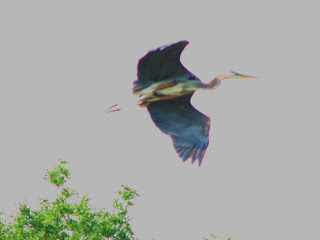 I haven't given up on finding a rookery and watch every flying heron with interest. I took this picture into the sun, giving the bird a phantom-like appearance. It doesn't eat mosquitoes, but eats fish that presumably eat mosquito larvae.

It was worth a few insect bites to see these birds in action.
Posted by Ruth at 11:21 pm

Email ThisBlogThis!Share to TwitterShare to FacebookShare to Pinterest
Labels: birds, health and wellness