Jennifer challenged her readers today to write a post about three new things. We all know there is nothing new under the sun, but there sure are a lot of things under the sun (the very hot sun!) that I do not know. I left for a walk before I had breakfast today. We have had very hot, humid weather this week with thunderstorms each evening so an early hike seemed like a good idea. 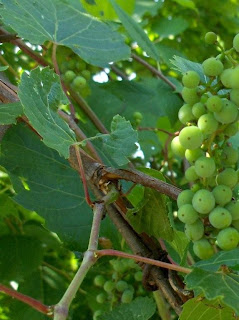 As I started on the trail I passed two Moslem women in conservative attire collecting something from the nearby bushes. I greeted them and asked what they were gathering. They were picking large leaves for making stuffed grape leaves, a dish similar to our cabbage rolls. I had not noticed the wild grape vines growing up the trees and shrubs until they pointed them out. 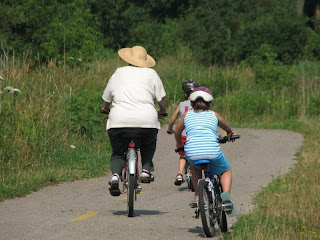 This particular trail is paved for 4.5 km and is very popular for biking and roller blading. I moved aside as an older lady, most certainly a grandmother, rode her bike past me with two young children. She was enthusiastic about everything she saw, pointing out the butterfly weeds and other wild flowers.
"That's Blue Vervain", she told the girl. "Now you remember that!"
I made a mental note as I looked at the wildflower and will remember that myself.
A while later I passed them again. Grandmother had gone off the trail to the river's edge and was showing the children more interesting things. All I could see was her straw hat through the tall grass, but I could hear her voice as she continued to teach her young charges. 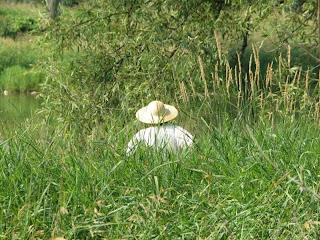 I drove around to the other side of the river to check the Osprey nest at Snyder's Flats. As I walked toward the river, a gentleman stopped to ask me if I had seen the Osprey. He told me he had seen three young birds fledge two weeks ago and described how the adults had encouraged the fledglings to soar high up in the sky right away. The birds were still being fed by the parents in the nest, and needed more fishing experience before they were independent. He also told me where to find Bald Eagles in the region and gave me the name of a nature centre that does raptor walks. As we talked, the Osprey returned to the nest with a fish and I was able to get a number of action shots. 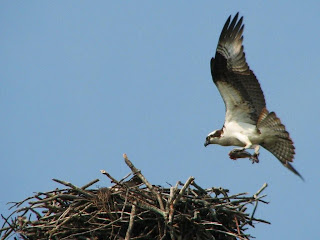 How exciting! So much to see. So much to learn.
How important it is to ask the right people the right questions.

Our newspaper printed a disturbing story yesterday. A man, now deceased, had willed his property to the city for use as a park. He had a small house on the land and had invested his time over the years planting many trees and developing a haven for birds and animals. The property is accessible to the public and is near a very upscale subdivision. Recently there has been a lot of vandalism at the site. Trees have been destroyed, the house has been trashed and the place has become an insurance risk for the city. A place that could be enjoyed by many has been ruined by a few thoughtless, uncaring youth. As I watched the old lady with the children today, I thought to myself,
"Those children are fortunate to have someone who cares enough to teach them about nature. They will grow up to respect the environment, not destroy it." 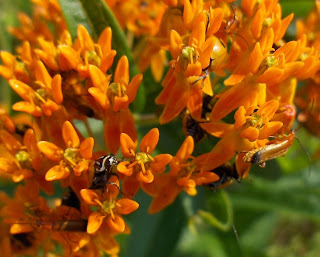 I learned more than three things today and time flew by quickly. My pre-breakfast hike ended at noon and I was hungry, hot and tired, but enthused about what I had seen and heard. Now I can sit and look up the names of all the beetles on this butterfly weed.
Posted by Ruth at 7:25 pm