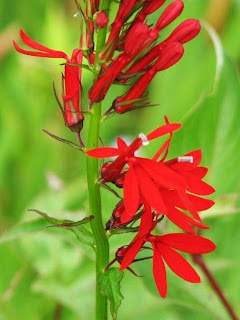 I enjoyed finding some new wildflowers when we were vacationing on Manitoulin Island. The growing season was a few weeks behind our home to the south and some flowers were blooming that were finished in southern Ontario in early June. 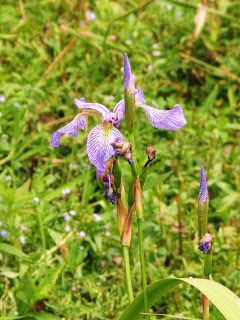 Iris and Forget-me-not in creek bed
In one dried up creek bed, I saw masses of blue Forget-me-nots and wild Irises accented by spikes of the bright red Cardinal Flower. Behind our cabin there were masses of Jewelweed, another of those special orange wildflowers. The ditches on the nearby road were colourful with flowering Milkweed and Spotted Joe Pye Weed. 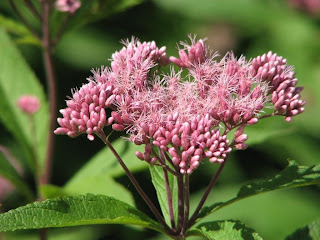 There is a web site I often visit when trying to identify native plants. Andy's Northern Ontario Wildflowers is an extensive, informative and well organized site featuring flowers of the Sudbury and Manitoulin Island region. Andy is a geologist with an interest in wildflowers. He has posted a presentation on The Flora of Manitoulin Island. He describes how this region has species from 8 of 9 Canadian floristic regions including Arctic, Alpine, Prairie, Boreal, Northern Mixed Forest, Great Lakes/St. Lawrence, Deciduous Forest and Maritime. The only region not represented is Atlantic Plains. Large areas of the island are undisturbed and unusual species can be found at various times of the year. From the rocky heights of the escarpment to the sand dunes along the Lake Huron shoreline, there are several unique environments with their own flora and fauna.
The Hawberry is a type of hawthorn that is said to be found only on Manitoulin Island. (I don't know if that is true!) People who live on the island are called Haweaters and a Haweater festival is held each August. I didn't recognize this bush, but I bought some Hawberry Jelly to try at home.
I have many more pictures of flowers and shrubs to identify from this trip, but that will likely be a winter project. 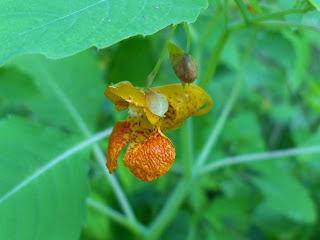 Touch-me-not or Jewelweed
Posted by Ruth at 12:00 am