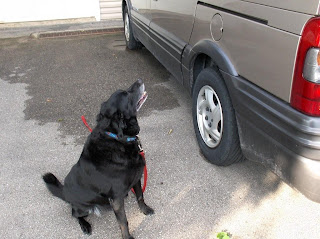 Dakota had his annual checkup and shots last month and our vet suggested that he needed his teeth cleaned under general anaesthetic. He gave us an estimate of close to $500.00 for the procedure and antibiotics the dog would need both pre and postoperatively. Dakota is almost nine years old and has been healthy, costing us no more than his routine care each year. Our daughters, who love their dog dearly, said they would contribute money to cover the expense. Quite frankly, his breath was so bad that we had to send him out of the room when he was panting.

I see the consequences of poor dental hygiene in people frequently. Recently we had a patient in the hospital who developed a severe infection in her knee joint replacement because of her rotting teeth and infected gums. My daughter, who works in a cardiac surgery unit, also knows first hand of the danger oral infections can create for the heart. 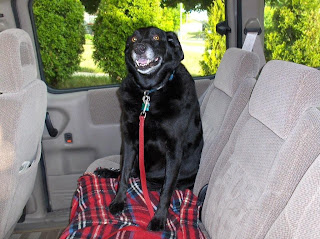 So early this morning the dog was invited to go for a car ride, an unusual treat for a work day. He was likely wondering which trail we were going to explore and was not at all impressed with our final destination!

Dakota had his blood work, IV antibiotics, tooth cleaning and a small growth removed from his head and was ready to come home six hours later. His breath smells like that of a new puppy and his teeth are so clean and white again. 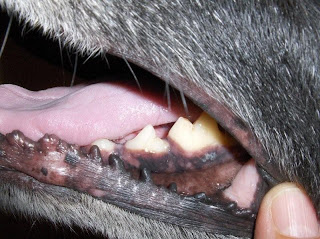 We have never been able to brush his teeth, but didn't try until he was an adult. Any dog we get in the future will learn early to tolerate a toothbrush. Our vet has recommended a special dog food to prevent plaque buildup in the future but I don't know how effective it would be, especially for the price. We had purchased Dentabones for Dakota, but he chomped and swallowed them down so quickly that they did nothing for his teeth.

Our pets are treated so well in North America. Dakota's Mexican "cousins" are treated better than strays, but are kept outdoors and are not pampered. Our dog is part of the family, is never moody, is always happy to see us, and keeps us walking.
And that is good news for our health too.
Posted by Ruth at 6:54 pm