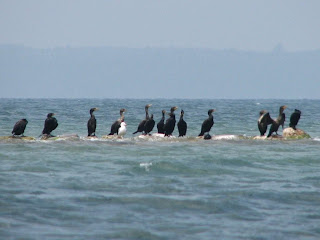 Cormorants claim the rock in the afternoon
Midway between our camp and the point of land across from us on Lake Manitou was a rocky shoal. We could not get too close to it in the boat, but through my binoculars I could see a variety of birds perched and feeding in the area. When we were here last September, there were hundreds of cormorants in the area, in fact, I saw few other birds on the water. Last week there were fewer cormorants and a number of other waterbirds were competing for the best fishing spots. 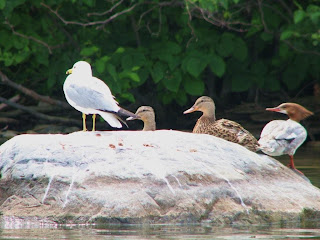 Mallard ducks were plentiful, but the males were lacking most of the feathers of their bright green heads. For a while I thought they were teal ducks until I saw the patchy green heads and orange feet. Female Common Mergansers were seen frequently, but I never recognized a single male. The gulls made themselves comfortable with every group of birds.

I loved watching the terns. Black Terns and Caspian Terns are seen in fewer areas in Ontario now due to loss of habitat and increased competition with gulls. The Black Terns reminded me of swallows in flight. In the evenings they performed their acrobatic flights near the shore while fishing for minnows. 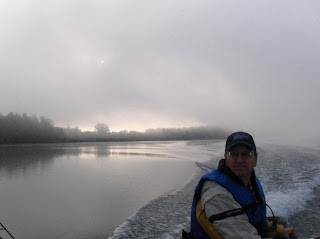 One cool morning we left the dock around 8:00AM as the fog was lifting from the warmer water. The sun seemed to be burning off the moisture and we moved away from the shoreline. Unexpectedly, the fog descended again and we lost sight of all landmarks. My husband turned off the motor and we drifted in the stillness waiting for the fog to lift again. Minutes later, a few terns appeared close to the boat and we could hear more of them in the distance. Morning was the time the terns claimed the rock. We had a compass, and using the terns as a "landmark", we were able to head in the right direction to the camp. There was no need for panic this time, but the incident gave me greater respect for the potential danger of fog. 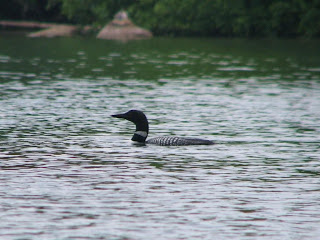 This last bird would have no part of the rock culture. I have never seen a loon out of the water. This one was diving for fish and it was fun to guess where he might reappear. In my estimation, there is no more relaxing sound than the yodel of a loon across the water.
And yes...there were fish for our dinner too.
Posted by Ruth at 4:50 pm