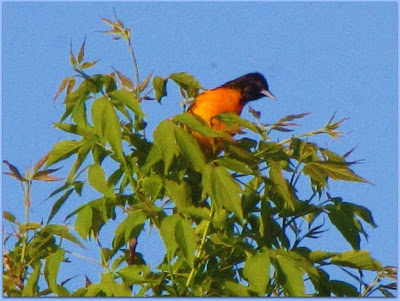 I appreciate the thoughtful comments on my previous post and agree that keeping clean and protected feeders is not a disservice to birds, as long as the welfare of the bird or animal is put first, not the interests of the person attracting them.

I have purchased a couple of different CDs of bird songs in an effort to learn to identify birds I may not see. It is not easy to use a CD in the field and some of them would not track back to a specific bird, but rather to a family of birds. That would require me to listen to all the ducks, for instance, to find the one I wanted to hear. 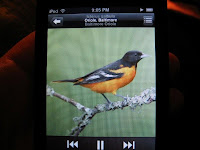 I read about birdJam, a program which organizes bird songs on an Apple iPod. I had an under-used iPod Touch and decided to download the program. It is very, very user friendly and with the touch of my finger I could see each bird and hear all its different songs and calls. I had no external speakers besides my earphones and I did not plan to use the unit to call birds.

Last month I went on a group hike led by Neil Taylor. He used external speakers attached to his MP3 player to attract a Red-bellied Woodpecker that was nearby. He explained that the player should be used briefly as not to stress the bird. I read more about attracting birds this way and decided to get some portable speakers for my iPod. The iMainGo is a powerful portable speaker that is easy to carry on a wrist. I picked one up for $20 at Circuit City. 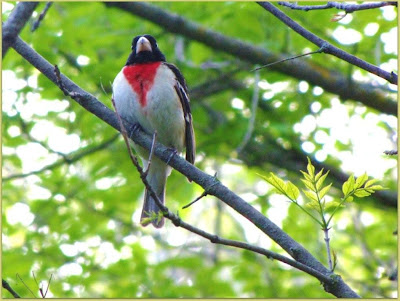 Armed with my high tech gear, I went to the river and tried the unit out. No one else was around that evening and I could hear many birds singing in the trees. I knew Baltimore Orioles were around so I tried that call first. Immediately, an Oriole looked down from the treetop. I then tried the Rose-breasted Grosbeak song. Again the response was fast as a pair of them appeared on a tree beside me. I noticed they looked very alert and somewhat alarmed and the female had some nesting material in her beak. It seemed they were concerned about another bird in their territory and I felt badly that I had presented a false challenge to their nesting area. That ended my experimentation. The unit did work, but bird songs are not just pretty melodies;- they are a language. There are risks to calling birds during nesting times. They may leave a nest unattended and predators can take advantage of this. 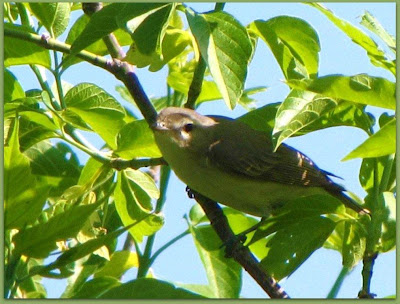 I saw this Philadephia Vireo in a tree and a pair of Brown-headed Cowbirds nearby. (I did not attract it by sound). An empty nest is an opportunity for the Cowbird to lay an egg for another bird to raise.

Mike Burrell, an experienced birder and researcher from our area had this to say...

As far as bird song playback goes. It certainly stresses a bird. But, so does pishing, squeaking, etc. The difference between playing bird song for photography and pishing is that pishing might stress a bird for a few seconds, while playing a song would probably be for several minutes. I think that season doesn't really matter, you are stressing the bird no matter the time of year. What does matter to me is basically that the bird isn't repeatedly stressed. For example, I wouldn't play a tape for a bird at Point Pelee in spring, but playing a tape for a Yellow Warbler in your local park once a season is reasonable. Again, if you pay attention to the bird, you should be able to tell you are stressing it. In all reality I think anyone who wants to play recordings should ask themselves if one person getting a photo of a bird is worth causing it stress. Doing bird research obviously has a purpose which we weigh as more important than the possible consequences of your actions. If birders are educated about the bird, they will make good decisions... 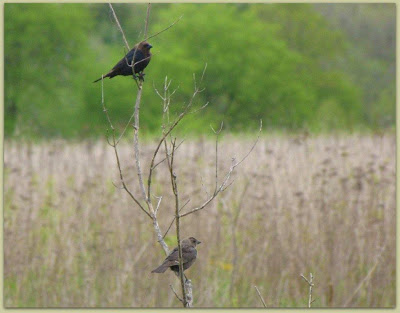 The birdJam site has an informative article in the ethical use of the software here. "Some birders using playback keep on playing the songs until the bird lands right in front of them. We believe that's going too far."

I listen to the bird songs in my car through the external speakers on the way to work. ( I don't like earbuds) I don't expect to use the unit on a regular basis to attract birds, and if I do use it in the field, I must put the welfare of the bird ahead of my own interest of seeing it in the open.
Posted by Ruth at 12:00 am