Big Birds Against the Sky 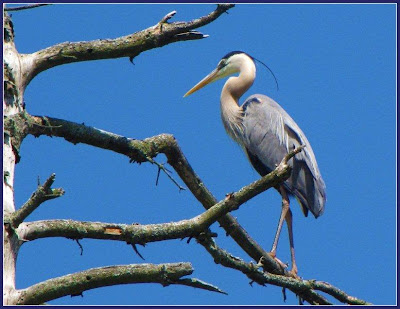 I remember being surprised the first time I saw a Great Blue Heron perched high above the river in a willow tree. Since then I have visited a local heronry several times and have watched pairs of these large birds nesting and mating on flimsy tree top branches. Still, I look twice when I see them them against the sky rather than wading at the water's edge. 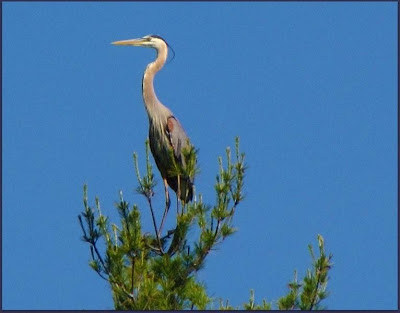 The heron in the first picture stayed in one place for over an hour while I sat below and watched the owl and other birds at the swamp. Its mate perched on the very top of a pine tree a short distance away. I always think of flying dinosaurs when I watch herons in flight and their call sounds harsh and primitive. 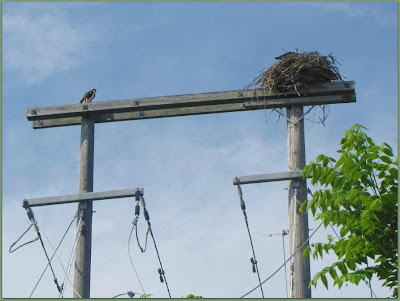 Osprey Nest on the Grand River

Last year we watched a pair of Osprey build a large nest across the river from the hospital. They flew by many times with large sticks which they snapped off the tops of dead trees. After a lot of work, they abruptly left and abandoned the nest at the end of June. They have returned this year and possibly have eggs or young in the nest. Time will tell if they stay around this season. 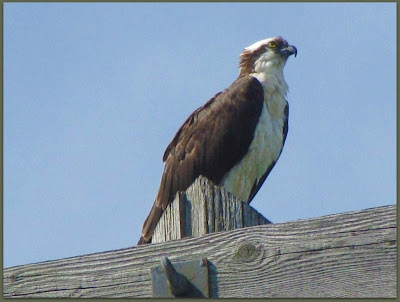 The nest is built right above a walking trail and the birds seemed very upset when people approached their perch last summer. But this year, they appear more tolerant of pedestrian traffic. I stood behind some bushes to take these pictures of the male on the hydro post and the female on the nest. 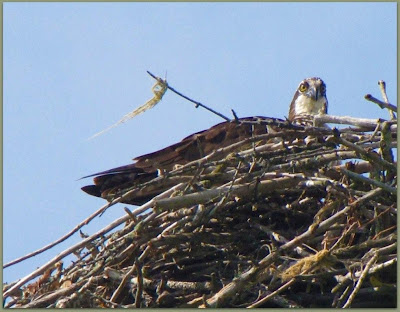 A couple of days ago, the Snowbirds of the Canadian Armed Forces did a fly by through our city. Our small regional airport is close to the hospital and I heard they would be landing there at 10:20 AM. I took one of my patients outside with me and watched his surprise and delight as the nine planes passed overhead three times with a loud, loud roar. 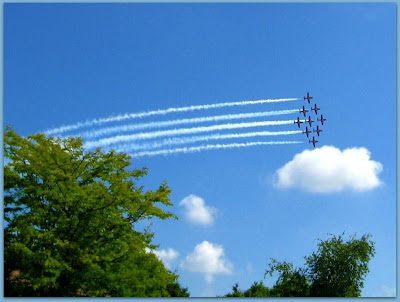 I visited Israel in 1977 and watched the Israeli armed forces patrolling the air space between their border and Jordan as we swam in the Dead Sea. The military was ever present on that trip, in great contrast to peace we often take for granted in Canada. Military aircraft raise no cause for alarm when we see them in our skies, and for that I am very grateful.

Follow this link for more Skywatch posts from around the world.
Posted by Ruth at 2:32 pm