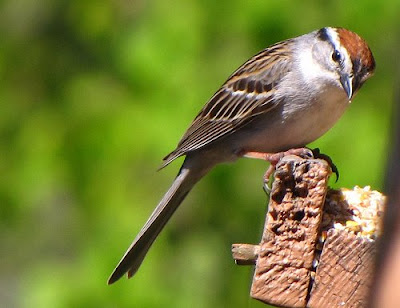 My ability to identify little brown birds is gradually improving and I generally recognize our regular seasonal visitors. American Tree Sparrows have returned north to nest and the Chipping Sparrow has taken its place at the feeders. It has the same chestnut cap but lacks a spot on the white breast. It is also smaller than the winter sparrow and is a very messy bird, scattering seeds all over the place for the ground feeders to clean up later. 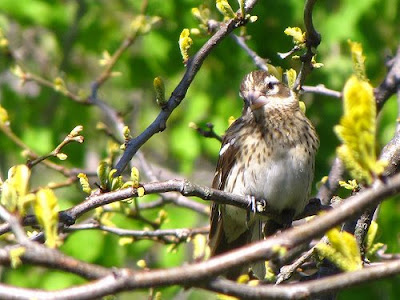 The female Red-breasted Grosbeak is very plain compared to her handsome mate as she waits inconspicuously for a place at the feeder. She can sing as beautifully as the male. In late summer the juvenile males share her colouring and it gets more confusing to tell the birds apart. 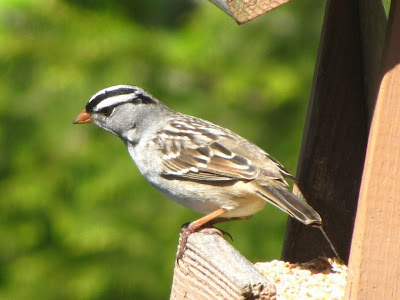 The White-crowned Sparrows have come and gone, although a few stragglers are found year round here. Its song is less melodious than the earlier arriving White-throated Sparrow but its fancy head gear sets it apart and makes it easy to identify. 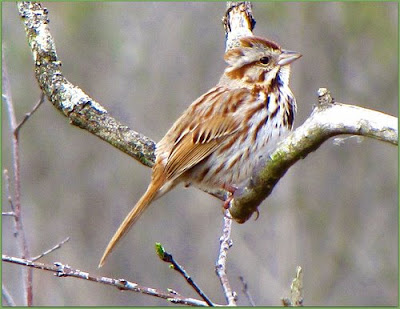 Our most familiar little brown bird is the ever-singing Song Sparrow. It can be seen belting out its familiar tune from conspicuous perches in the city or in the meadow. I found a lovely little volume of poetry written by Charles E. Jackson. Here is his ode to the Song Sparrow.