June Babies: Owls and More at the Swamp 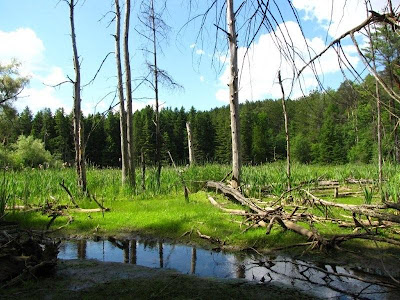 I received a tip from a couple of birders/photographers that a family of Great Horned Owls lived in the vicinity of a swamp just a few minutes from our home. I have seen Snowy Owls in the winter but have never seen any other type of owl in the wild. There have been various "Owl Prowls" at local conservation areas but they take place after dark and are more about hearing than seeing these birds. The trail was familiar to me but I had to go off the path and climb a sizable esker before descending to a small creek and swamp. Every step I took in the bush stirred up mosquitoes but when I got to the opening, a breeze kept them at bay. I sat on a mossy log and took a picture of the view. Scanning with binoculars, I found the juvenile Great Horned Owl in a pine tree in the opposite end of the swamp. I was surprised to make the discovery at three in the afternoon. 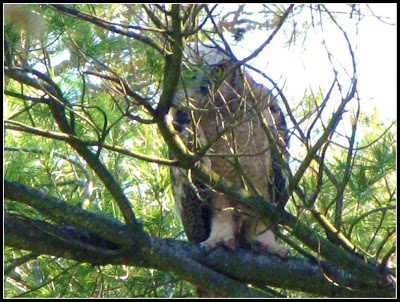 I returned early the next morning before work (this time with bug repellent) and saw the same owl in a pine tree much closer to my seat. For such a large bird, it was well camouflaged in the tree as it sat motionless for over an hour. When I looked at my pictures later it seemed that the bird spent much of its time with its large eyes closed. Babies do need lots of sleep. Just as I was leaving, a group of crows started harassing the young owl and it flew deeper into the bush. 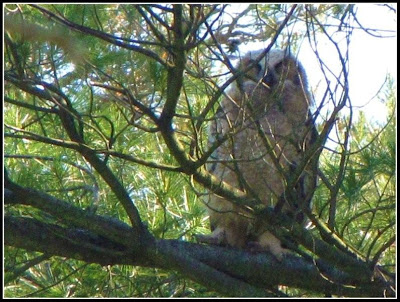 The swamp was alive with more than mosquitoes and from my log I watched a Great Crested Flycatcher, a Belted Kingfisher and two Great Blue Herons as they looked for food. Directly across from me a pair of House Wrens brought a succession of bugs to their nest in a dead stump. They would sing loudly from a branch when they were not feeding the young wrens. 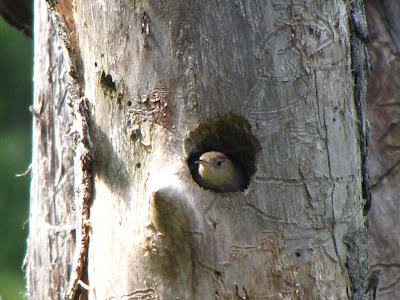 House Wren in its nest

This past Sunday a couple of friends were sitting at the same location early in the morning when a young coyote stepped out of the rushes. They reported that some emergency vehicles drove on a nearby road with sirens on, (this is an industrial/residential zone of the city) and the swamp came alive with the howls of several invisible coyotes. I hoped to see a young coyote when I came early in the morning but was not lucky enough to have one come out in the open even though I could hear movement in the area. Andre has kindly allowed me to post this picture he took of the pup which looks very healthy and inquisitive. 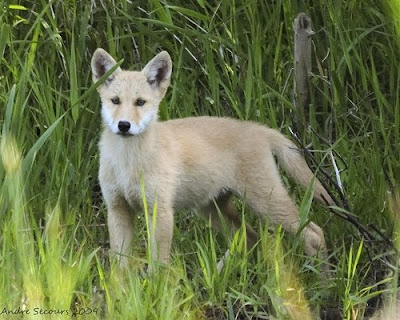 The swamp was inaccessible by foot beyond where I stood which is likely why it offered such a variety of birds and animals. Many other creatures with young were hidden in the vegetation. But I was very happy to find the owl, a species that is not rare, but is rarely seen due to its secretive ways.
Posted by Ruth at 4:08 pm