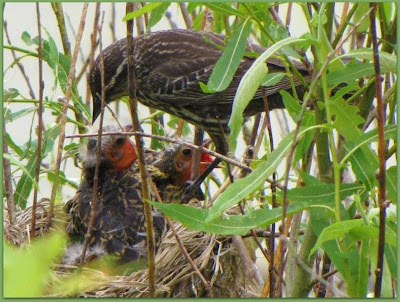 I started the week with pictures of some adorable children and thought I would continue the theme of babies and parenting. There are many young birds and animals about right now and some very busy parents feeding multiple hungry mouths. It isn't all that hard to figure out where nests are as the adult birds tend to get very aggressive when you approach them. If you see an adult with a grub in its beak, just watch where it is going as the babies are sure to be around. I missed this Red-winged Blackbird nest at first because it was in a small tree. I thought these birds nested near the ground in rushes and was looking down instead of up. 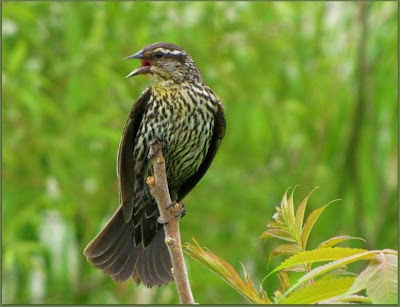 I knew I was near as the female was acting very territorial and scolded me soundly for standing in the vicinity of her nest. I did back up as she was distressed and would not go to the nest to feed her three youngsters. The baby birds in the first picture fledged later the same day. 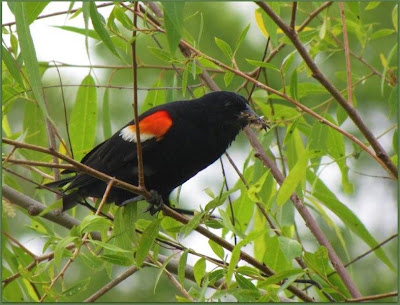 The male Red-winged Blackbird was also an involved parent and was just a noisy as his mate. Last year I took pictures of a male attacking a Red-tailed hawk perched too close to a nest. (here). These bird parents are most protective and alert for possible danger. 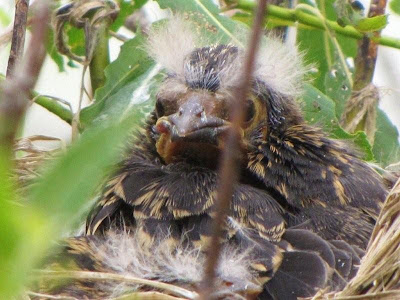 And here is the face only a mother or father could love. This homely chick was crowded in the nest with two others, ready to fledge. They will hide among the rushes and grass at the edge of the swamp and still be fed my the parents until they are more mature and able to fend for themselves.
/~~/~~/
(I am having some significant computer problems today with very frequent Vista crashes. I hope to figure out the problem and get back to reading and commenting on blogs soon)
Posted by Ruth at 10:40 pm