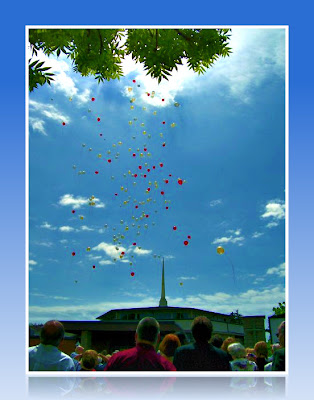 The church we attend is celebrating its 100th anniversary this weekend. Earlier, the congregation stood outside, released helium filled balloons into the sky and watched as they rose above the spire and into the clouds. My husband's grandfather was a founding member of this congregation and many hundreds, even thousands of people have been through its doors over the years. This is the third or fourth building the congregation has used for worship but we know that the church is the people, not the physical structure.

It is one thing to have a history and another thing to have a future. The Christian church has been in existence for over 2000 years and has appeared in many forms in various cultural settings. The Church must continue to embrace change without compromising truth and become meaningful to future generations. I enjoy the writings of blogger iMonk who writes thought provoking "dispatches from the post-evangelical wilderness". He challenges Christians whose focus may be political or just mired in the past. True Christianity turns believers into Jesus-impersonators, not political activists or judgemental, unloving critics. 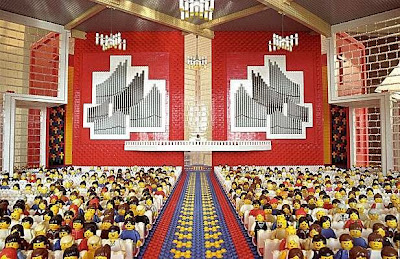 The visiting minister this morning showed this picture of a Lego church created by Amy Hughes. This masterpiece was built over eighteen months with over 75,000 of the plastic building blocks.
1 Peter 2:5 reads like this in The Message;-

Present yourselves as building stones for the construction of a sanctuary vibrant with life, in which you'll serve as holy priests offering Christ-approved lives up to God.

We are each like a Lego block and when placed together create a spiritual building of worship and service. I cannot guess what the world will look like in another 100 years or if this congregation will remain in its present form. As Christians we must follow the advice given by the writer in Hebrews 12:1-2 (The Message);-

Do you see what this means-
all these pioneers who blazed the way,
all these veterans cheering us on?
It means we'd better get on with it.
Strip down, start running-and never quit!
No extra spiritual fat, no parasitic sins.
Keep your eyes on Jesus, who both began
and finished this race we're in...
Posted by Ruth at 4:52 pm