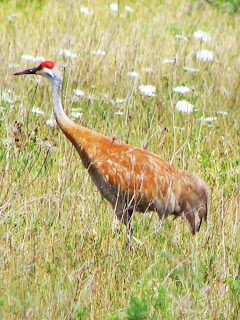 My Birds of Ontario guidebook indicates that there is only one species of crane found in the province. The Sandhill Crane was formerly more widespread but has been extirpated in south-western Ontario where we live since the 1920's. These large birds are found in Sault Ste Marie and northward in the summer breeding season. Manitoulin Island serves as a major migratory route stopover for birds crossing the Great Lakes including the Sandhill Cranes. It is the most southerly extent of their range in Ontario, and the population of these magnificent birds has been increasing there in recent years. 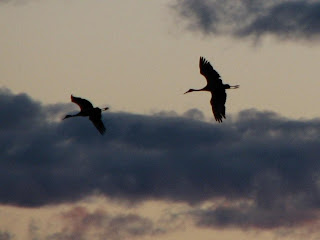 On our first evening there, I heard their distinctive rattling call in the field across the road. Having no idea what could make such a noise, we set off to investigate expecting to see some type of grouse or turkey. As we neared the meadow, two cranes flew into the air and off into the distance and I had a quick view of a new bird.
In total, we saw about twenty birds in our travels around the island. Our host told us they arrive by the hundreds in this area during fall migration and can be a nuisance as they eat the freshly planted fall crops in the farm fields.
Cranes mate for life and each spring they reinforce their pair bond with an elaborate courtship dance. 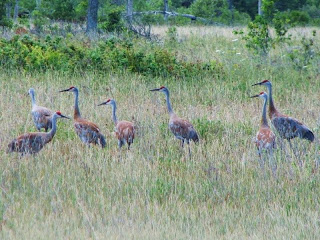 All the cranes we saw had brown feathers, but apparently they moult in late summer to a uniform grey colour. I have read that the cinnamon brown colour is from iron oxides in the water or from rubbing their bodies in the soil. These birds are omnivores eating insects, invertebrates, grains, tubers and small vertebrates.
They were truly my most interesting new bird of the week. I loved to watch them flying at dusk, silhouetted against the sunset. This site from Michigan's Bernard W. Baker Sanctuary gives more information about the Sandhill Crane. 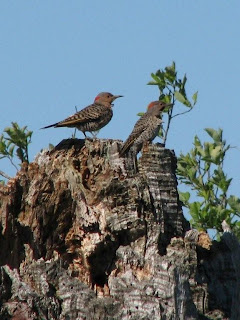 I walked over to see the cranes every day and in the adjacent meadow, these Northern Flickers were usually perched or feeding on dead stumps and branches. They were most beautiful in flight with their yellow under wings and tail feathers flashing in the sunlight. I took many pictures of them and this is my favourite.
Posted by Ruth at 6:29 pm