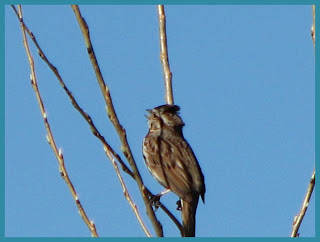 A few weeks ago I received a comment on a Friday Flowers post from North Carolina poet, Terri Erickson. She referred me to a poem of hers titled 'Queen Anne's Lace', published recently in the Christian Science Monitor. I copied the poem in the comments section of the post and later looked her up on the internet. When I realized that she had published a volume of poems, I contacted her for permission to use her poetry on this blog. I ordered her book Thread Count, a collection of 102 poems, which arrived today. I have been reading it while sipping my afternoon tea and enjoy her style very much. She has kindly given me permission to share a few of her poems as I have purchased her book. Here is a sample of one of them.

her feathers in all
their muted
shades of brown and gray,
as if the energy expended by

this frail body propelled
the earth in its daily spin. She
sang for seconds only, opening
her beak wide enough

to swallow the
sky. Then she flew away, as if
she had done at last, the thing she
had been made for

Email ThisBlogThis!Share to TwitterShare to FacebookShare to Pinterest
Labels: Poetry