The Becka recently rented a movie she had studied in film class at high school called Run Lola Run. This 1998 German movie tells the story of a woman named Lola who must obtain a large sum of money in 20 minutes in order to save the life of her boyfriend. The film presents three different scenarios demonstrating how changing just a small incident in the story allows for a completely different ending. How often have we looked back on a certain event in our lives and said, "If only I had done this or done that!"

About 15 years ago, I fell on ice and broke my arm badly while walking into work. I had parked on a street three or four blocks away from the hospital and had risked the treacherously icy sidewalks in order to save five dollars at the parking garage. I had surgery and was off work for 3 months. I revisited that morning many times in my mind and wished I had done things differently.

We were at church yesterday and were about to slip out early right at the end of the sermon. But the pastor did not end the service immediately and we decided to stay a few minutes longer. We left about twenty minutes later for the short drive to our home. On the expressway near our exit, the traffic drew to a complete halt and we sat for 45 minutes waiting for what we assumed was an accident. 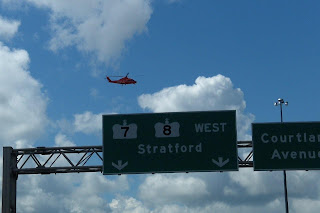 We watched as a helicopter arrived and airlifted a seriously injured person from the highway. We found out later that a large SUV had crossed the median and hit a car going the opposite way head on, killing the driver and seriously injuring her passenger. We drive this road every day. If we had left church when we initially planned to, we would have been in the area of the accident when it happened. We talked about it later and Becka said that as she sat in the traffic she was thinking about Run Lola Run. Little decisions can change the ending of our story.

We are able to control our destiny to some degree with the life choices we make. Fate speaks of a force that predetermines and orders the events in our lives. In Greek mythology, the three Fates spun, measured and cut the threads of life. People may seek to learn their fate through divination or seers, but I do not wish to look in a crystal ball in order to see my future. It is best to let things unfold a day at a time. Each time I face an unexpected delay or change in my agenda, I do not fret. We never know if that delay may be a seemingly small detail that will change the ending of our day in a significant way.
Becka posted an account of this same event on her blog. She also inserted a short trailer for Run Lola Run.

Trust in the Lord with all your heart,
And lean not on your own understanding;
In all your ways acknowledge Him,
And He shall direct your paths.
Proverbs 3: 5, 6
Posted by Ruth at 6:05 am

Email ThisBlogThis!Share to TwitterShare to FacebookShare to Pinterest
Labels: seasons of life, spirituality, this and that