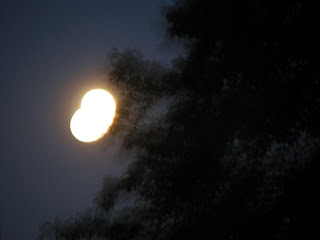 Planet Mars is coming closer to the earth and will be the brightest planet in our night sky starting in August. It will look as large as the full moon to the naked eye. It will maximize on Aug. 27 when Mars comes within 34.65M miles of earth. Be sure to watch the sky on Aug. 27 12:30 am. It will look like the earth has 2 moons. The next time Mars may come this close is in 2287. Share this with your friends as NO ONE ALIVE TODAY will ever see it again.

Did anyone else receive this email? I have to admit I did not immediately recognize it as a hoax that has been circulating for a few years now. I usually spot an urban legend quickly, but my knowledge of astronomy is limited to identifying the sun and moon, the Big Dipper and Orion's Belt. The last sentence should have caused bells to ring in my mind, but I did get suspicious eventually and looked up more information on the story before August 27th.

We are inundated with information every day from many sources. In an age of instant information, news is sometimes posted before all the facts are known. Conflicting reports abound, nowhere more than in the field of health. What is good for you one year may be deadly for you next year (Vitamin E supplements for example).

I once printed a number of stories and pictures from Snopes, some true and some false, and let the 10 and 11 year olds in my Sunday School class analyze them. The children had to decide which were true and which were hoaxes. It was a very difficult exercise, and they made many errors. They did not have enough knowledge on a variety of subjects to make an accurate judgement. Being misled by a story about "two moons" is not a big issue, but misinformation on more important issues can lead to poor decisions. Advertisers often rely on a gullible audience who are drawn to attractive claims that may or may not be substantiated. 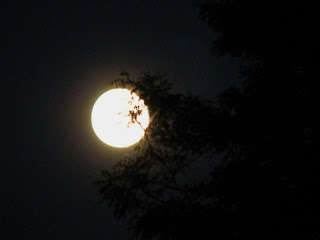 ONE MOON
August 27, 2007
It does not take an expert to recognize that the two moons were caused by taking a picture with a wobbly tripod. There was one full moon in the sky and no sign of Mars in the glare of city lights.
I did read the truth about the total eclipse of the moon that took place between 5 AM and 6 AM in our time zone on August 28th. I got up at 5:15 AM and watched through my kitchen window as the moon disappeared behind the shadow of the earth. Dawn arrived so I did not see the emerging moon as the shadow passed. In ancient cultures, eclipses brought fear because people did not understand what was happening. Our knowledge of the solar system eliminates fear, but with all our knowledge we are still open to deception.
We need to become media sceptics and teach our children to be critical thinkers. Theories are not facts, scientific studies can be poorly designed and there is always a bias to news reporting. 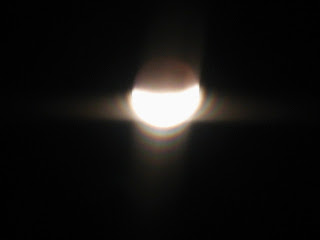 One day Chicken Little was walking in the woods when --KERPLUNK -- an acorn fell on her head "Oh my goodness!"said Chicken Little. "The sky is falling! I must go and tell the king.

Do you remember the ending to this story?
Posted by Ruth at 12:00 am