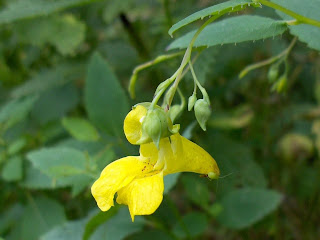 Impatiens pallida - Pale Jewelweed
Impatiens is a genus of over 800 flowering plants in the family Balsaminaceae. I have recognized the cultivated variety as long as I can remember as a tender annual that is used widely in summer gardens in our area. This most familiar plant, also known as Busy Lizzie, is a perennial that is native to East Africa. It grows up to a height of 60 cm tall in a warm climate. I planted an entire flat of this type of impatiens last year and every last plant was eaten by rodents capable of climbing into my planters. 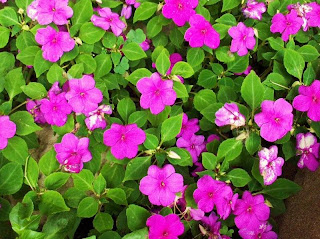 I took the picture above at the home of one of my patients who obviously does not feed squirrels and chipmunks.

When the seed pods of Impatiens flowers mature, they explode when touched, sending the seeds several metres away. Thus the name "impatiens" (impatient) or "touch-me-not". There are two types of Touch-me-nots native to North America. 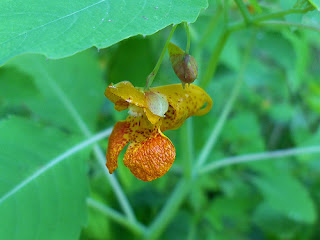 Impatiens Capensis - Spotted Jewelweed
Spotted Jewelweed, or Orange Balsam, is abundant in our area, growing in moist areas near streams and ditches. Pale Jewelweed has a similar yellow flower which I have found to be a little larger than its orange cousin. They grow side by side along the river where I walk.

I found a number of tall plants with pink flowers of the same shape growing along the same trail, but almost in the water. They were not in my flower guides and I had difficulty identifying them. They shared the watery stem common to impatiens and the flower was almost identical in shape to the other Jewelweeds. 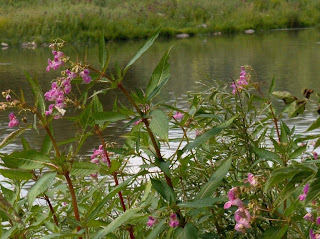 Impatiens Glandulifera - Himalayan Balsam
I discovered that this is a very invasive, non-native species known as Himalayan Balsam or Policeman's Helmet. The shape is reminiscent of British police headgear. It is an aggressive plant, spreading by seed quickly along waterways. In Britain, it is considered one of ten most noxious weeds and Balsam Bashing events are organized to try and control the plant. They have a very shallow root system and are easy to pull out of the ground. The flowers must be destroyed as they carry many seeds that will germinate the next year. 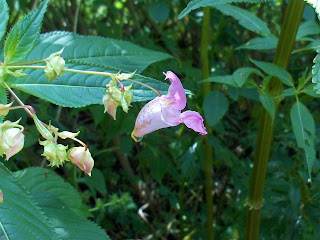 "Policeman's Helmet"
I know little about plant classification and find it interesting that all these flowers belong to the same family. The stems share similarities, but the flowers of the garden impatiens and the jewelweed are dissimilar except perhaps for the little curly point at the back of the bloom. Why has the Himalayan Balsam spread as a nuisance plant while the seeds from the non-native Busy Lizzie's do not germinate readily in the soil after the winter?
Posted by Ruth at 6:15 am