Cursed is the ground because of you;
through painful toil you will eat of it all the days of your life.
It will produce thorns and thistles for you,
and you will eat the plants of the field.
Genesis 3: 17,18 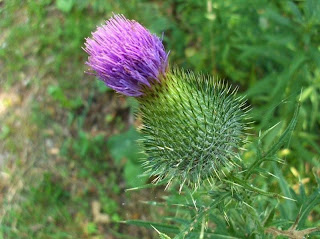 I doubt that many would purposely plant any of today's featured flowers in their garden, but I cannot help but admire their resilience and thorny beauty. This is the flowering season for several types of thistles, most of them alien to North America, but very adapted to our environment. We continue to have a dry summer but the thistles are thriving where other plants are wilting and dying. 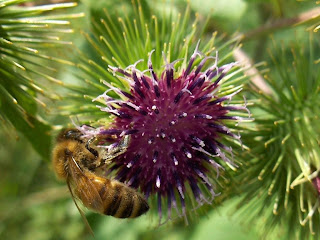 Grandma D. travelled to Scotland years ago and brought me a thistle brooch as a souvenir. The thistle is the national emblem of Scotland and only the Scots could take the curse of Genesis and make it into a celebrated blessing. Here is a version of the legend of the thistle.

The prickly purple thistle was adopted as the Emblem of Scotland during the rein of Alexander III (1249 -1286). Legend has it that an Army of King Haakon of Norway, intent on conquering the Scots landed at the Coast of Largs at night to surprise the sleeping Scottish Clansmen. In order to move more stealthily under the cover of darkness the Norsemen removed their footwear. As they drew near to the Scots it wasn't the only thing hiding under the cover of darkness. For one of Haakon's men unfortunately stood on one of these spiny little defenders and shrieked out in pain, alerting the Clansmen of the advancing Norsemen. Needless to say it was the Scots who won the day. The first use of the Thistle as a royal symbol of Scotland was on silver coins issued by James III in 1470.

The Order of the Thistle was founded in 1540 by King James V. The common badge worn by the knights was inscribed with the words "Nemo me impune lacessit", more commonly translated by the Scots as "Wha daurs meddle wi me." 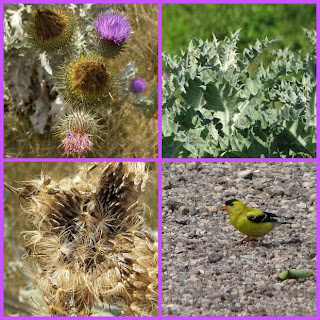 Who dares meddle with a thistle, especially a Scotch Thistle? There is a large patch of this particular thistle beneath the Osprey nest I have visited from time to time this year along the Grand River. The massive triangular stems are covered in stiff spines and no one would be inclined to take a shortcut through the plants. This week I noticed that many of the flowers are now dried heads and many goldfinches were around feeding on the seeds. 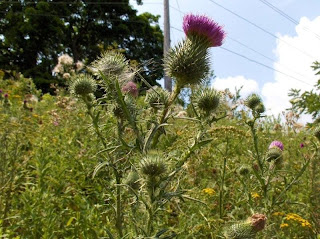 Other smaller thistles are also in bloom. The common Bull Thistle is everywhere in fields, ditches and fence lines. Like the Scotch Thistle, it has a spiny stem, but the thorns are not as dramatic to look at. 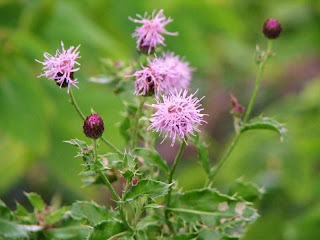 The Canada Thistle, also an alien European species, has no spines on the stems and the small flowers are more delicate. The leaves do have thorns on the margins. 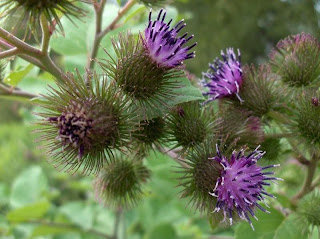 The flowers of the Common Burdock are also purple and the flower heads, or burs are thistle-like. In a few weeks I will be picking the dried burs off my socks when I come in from a walk on the trail. Laura at Natural Notes 3 wrote a very interesting post on Burdock earlier this year and demonstrated how to cook the tender shoots. 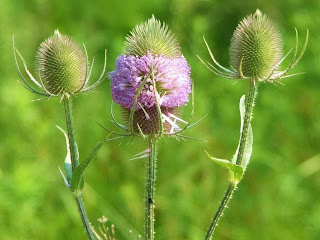 Finally, the Teasel is a very widespread alien plant that also has tiny lavender coloured petals in a spiny head. Common Teasel was planted for use in the wool industry and was brought to New York state from England for that purpose. The dried flower heads were fastened to the rim of a cylinder which revolved over wool fabric to "tease" the cloth and raise the nap. It is said that the hooked bristles on the Teasel inspired the invention of Velcro.

You can decide whether or not these thorny plants are a curse or a blessing. To a farmer, they surely are a nuisance in the grain fields and pastures. To the early settlers they were a source of food and they provide preferred seed for finches. Just be sure to admire them from a far and resist the impulse to pick one of their pretty flowers with your bare hands.
Posted by Ruth at 12:00 am